Chase Me Around (The Game)

Strategic & dynamic Card Game that will take you & your friends on a fun chase around the table! 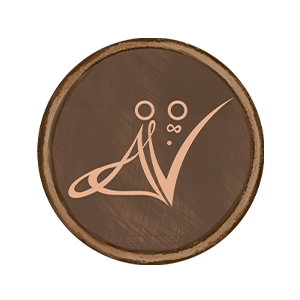 This Strategic Card Game will take you, your Family & Friends on a fun chase around the table! 5 min to learn, 10 min to play and guaranteed hours of fun, challenging other players, collecting tokens, playing powerful cards to reach winning combinations!

Are you ready to Chase and be Chased Around? :-) 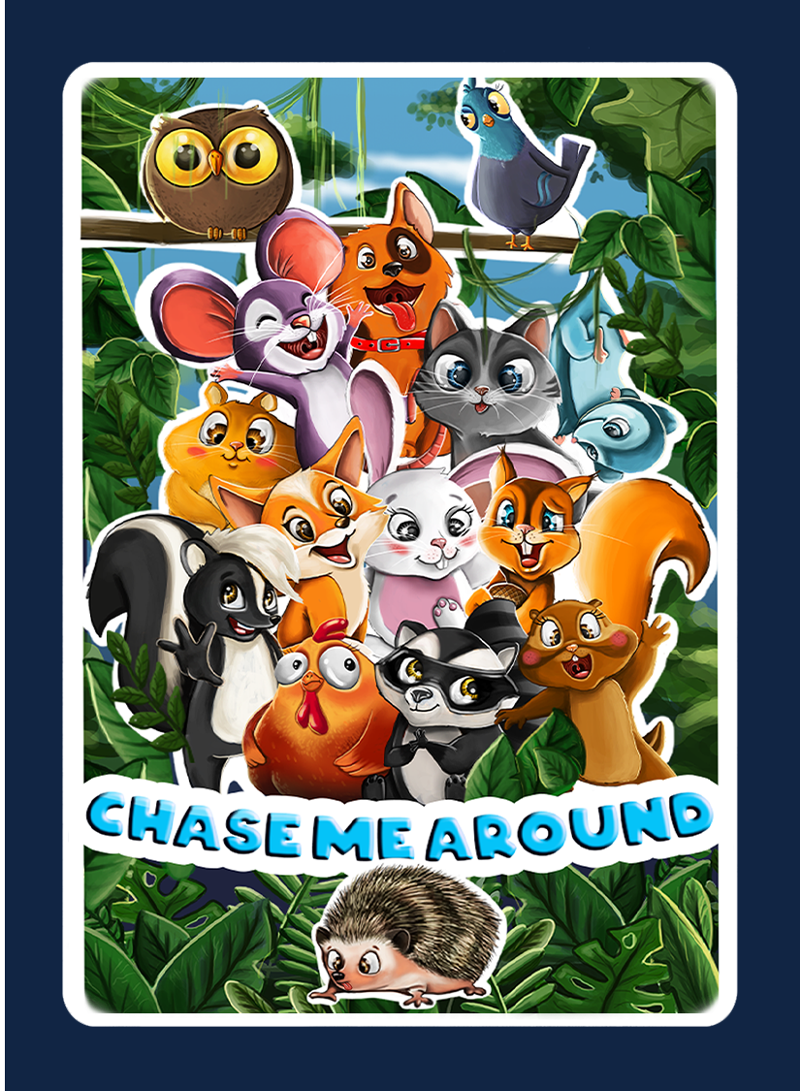 The game is for 1-4 players. For single players, check this short video showing the details of the Story Mode of playing solo Chase Me Around.

For 2-4 players, the game is played in turns, in clockwise fashion. A player wins by reaching a winning combination (trio) using cards and tokens. Winning Trios are shown, in order of importance, by the tokens in the Game Setup image below (the tokens are the twenty squared cards). 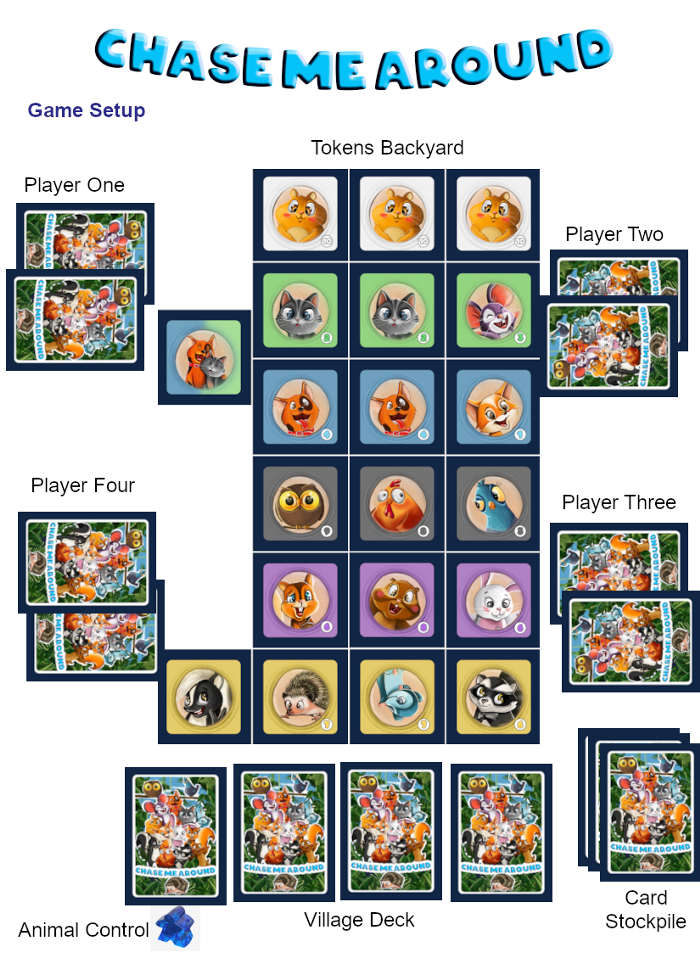 At game setup, each player is dealt two cards and MUST always have two cards at the beginning and at the end of any turn.

During their turn, players can do one of three things:

Winning a challenge or being able to play a card, allows the player to collect from the backyard the corresponding token to the card used. Won tokens are to be displayed in front of the player and clearly visible for all other players.

Challenges are decided by the highest card and when challenged a player must always show their highest card. In the example below the Hamster (10) wins the challenge against the Chipmunk (8). 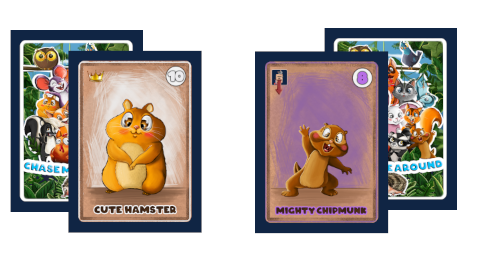 When players use cards for their powers, the real fun begins! Steal cards or tokens from other players, Chase tokens around and back to the Backyard, swap other players cards and ruin their strategy or defend your tokens & block plays in Style! :-)

All these powers and more are shown in the video below:

and listed in the cheatsheet below, also included in the game package. 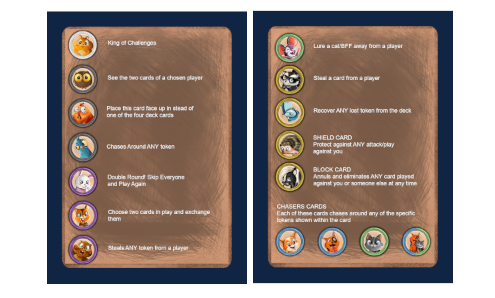 After winning a challenge or successfully playing a card and collecting the token(s) earned in that turn, the player goes on to discard the card used to the bottom of the stockpile and to pick a new card from the four cards forming the village deck. After selecting a card, the top card from the stockpile is used to replace the chosen card from the deck.

A game ends in two ways, either when a player collects a winning trio and claims victory by saying 'Chase Me Around' or with a 'Lighting Round' using the Animal Control Guy/Keeper.

In case two or more players reach a winning combination in the same turn (during the 'Lighting Round' or as result of a Raccoon, Squirrel or Skunk card being played for instance), the player with the highest ranking trio wins (e.g. Three Hamsters are the highest, three out of four rascals - yellow cards - are the lowest ranking trio). In the example below, the player on the left wins because Mouse-Cat-BFF (2nd rank) beats Squirrel-Chipmunk-Bunny (5th rank). 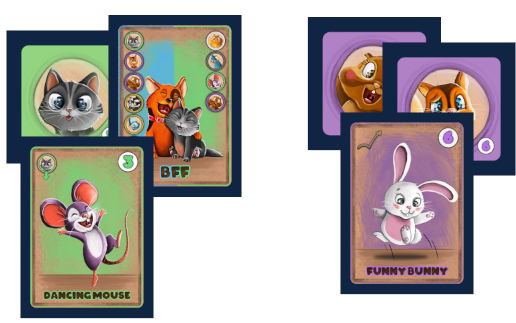 In the very rare but possible case scenario where two players reach the same winning combination, the players with most tokens wins. In the example shown below, the player on the right wins with 2 tokens as part of the trio vs. 1 token for the player on the left. 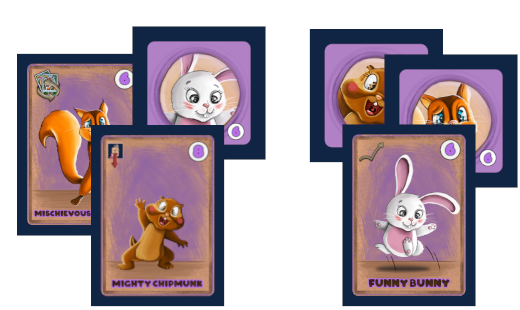 Using the Animal Control Guy/Keeper guarantees games will last no more than 10 min. At the beginning of his/her turn, a player moves the animal control guy/keeper by one spot around the village deck, until it completes two full round (20 steps = 20 turns). 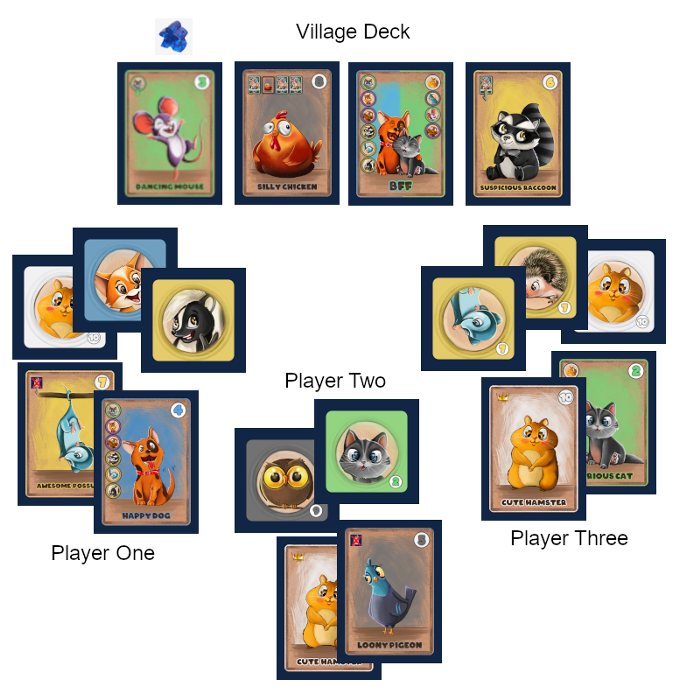 Of all six winning combinations shown, the highest is Mouse- Cat - BFF (2nd in order) reached by both Player two and Player Three. Of these two, the most powerful is that of Player two because it makes use of more tokens - one - vs. none for player three so Player Two is the Winner of this exciting lighting round of Chase me Around!

Chase Me Around is a game that will never cease to entertain. Once you master the base version of the game, you might want to give a try to one of its many variants, beginning by increasing the difficulty level.

There are three levels of difficulty: the base version (Happy Puppy Mode) is the game we have discussed so far and it needs just a token (+ 2 cards) of the same combination to form a winning trio. The medium level (Pretty Kitty Mode) requires 2 tokens (+1 card) to win. In the hard level (King Hamster Mode), players MUST collect all three tokens of a combination to claim victory. At this level, the Animal Control Guy/Keeper is not used.

We recommend starting at the easy level and increasing the difficulty (more strategy & longer games) as you go.

For more tips, tricks and variants, including an incredibly Fun Team Duel version (2 players vs. 2 players) and a very engaging BFF-Secret Mission version (All players together against the game), please see the tutorial videos in our youTube channel. 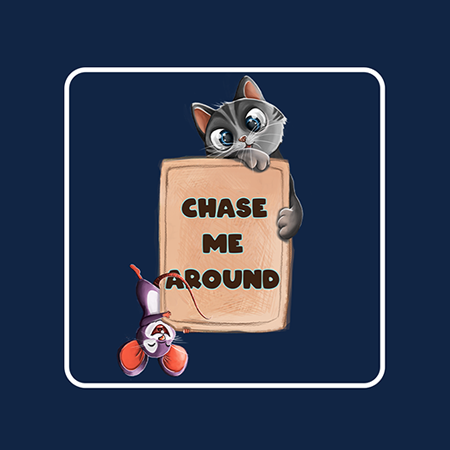 200
copies sold
$3140.00
raised during this crowd sale
This sale has ended, but you can still buy the game.

Chase Me Around (The Game)
200 copies sold