The Nicolas Rolichon deck is one of the most fashinating misteries of Tarot history.

Black and white images of the 22 Trumps and 13 minors, appeared on the French magazine "Larousse Mensuelle Illustrated" in July 1919, the quality of the details of the images is so good that it seems to be obtained from a perfectly preserved woodblock. Nobody knows how the magazine got the images, the deck is currently considered lost, so these 35 B&W images are all we have of this ancient deck. BTW, the deck has been identified because the 2 of coins is present among the pip cards, with the inscription "Faict a Lyon par Nicolas Rolichon".

The author is a mistery, too: we have news of two cardmakers in Lyon named Nicolas Rolichon, father and son, actives 1572-83 and 1605-35 - at the latest, 15 years before the Noblet deck and 66 before Dodal! - but historians think it's too early and point to the end of XVII century, while admitting there's no notice of any other cardmaker in Lyon with this name. In any case, if it is not the oldest ever, for sure the Nicolas Rolichon deck is one of the oldest known Tarot de Marseille and a rare explample of T.d.M. of Tipe I. The drawings are very similar to the ones of Dodal or Payen decks - IMO, made by a finer artist - but there are many small differences; the most evident is the Death card, looking left instead of right, as in almost all T.d.M.

There's one interesting difference between Rolichon and the standard T.d.M. decks: cards are much less elongated than the tipical ancient Italian and French decks, which typically have an aspect ratio close to 2:1. (TGC standard is about 1.7:1) Basically, this means that the Rolichon fit the TGC standard size much better than most T.d.M., without modifying the original drawings.

Anyway, I got on eBay a copy of the original "Larousse Mensuelle Illustrated" and here we are. :-)

Colors are mainly based on Jean-Pierre Payen deck, with few variations: the color scheme of T.d.M. is quite strict, so, while recreating the deck, there's little space for creativity; if you want it's just a matter to chose the "mood" of the 6 standard colors palette.

Fortunately, the 13 existing minors are well assorted and give us sufficient hints for recreating the missing cards, as they are extremely similar to theirs correspondents of Dodal or Payen decks, to which I was therefore inspired in the reconstruction.

For more informations about my Tarot decks, please visit my FB page at: Redirecting... 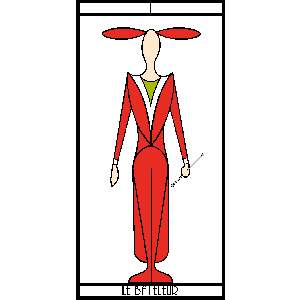