Duelspell - the game of wizards 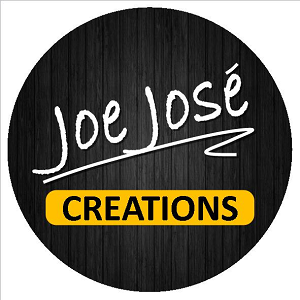 Duelspell The Game of Wizards is a head to head Card Game for avid gamers.

Below is a 1 Minute 30 second Game-Play Overview video!

Below is a short How To Play Video: The 6 Steps In 6 Minutes!

The object of the game:

Duelspell is played in rounds within a set duel formation, with two players sat opposite each other. When playing the game, players play one row at a time starting at Row 1 (one Spell card) and finishing at Row 4 (four Helper cards).

The object is simple: Using the deck of 28 Spell and 28 Helper cards, both players must build and put down the strongest run of Mythical Helpers & Magical Spells on each row of their formation... because for each row lost a player must move their wizard one step inwards towards the deadly centre Vortex. The first player to be forced onto the Vortex loses the duel and the game! 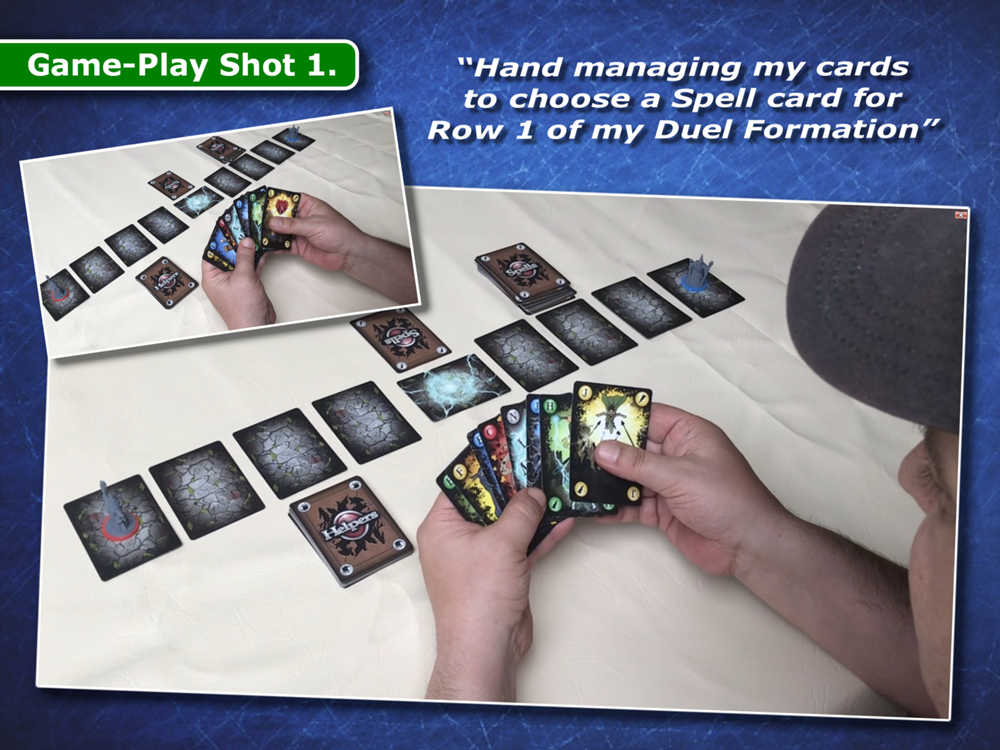 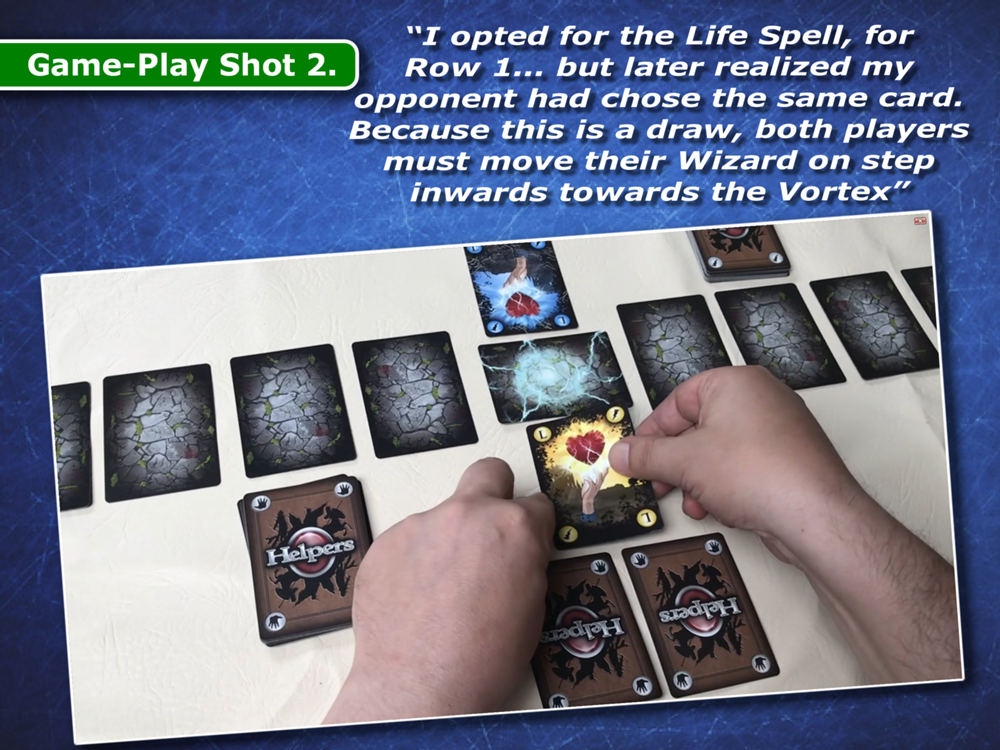 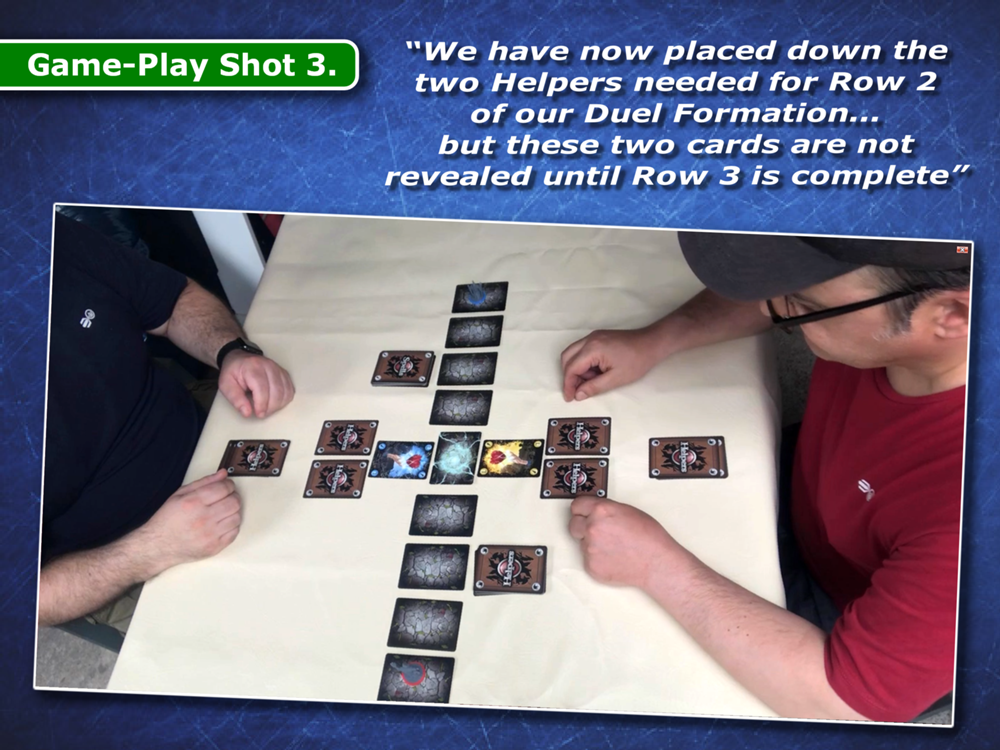 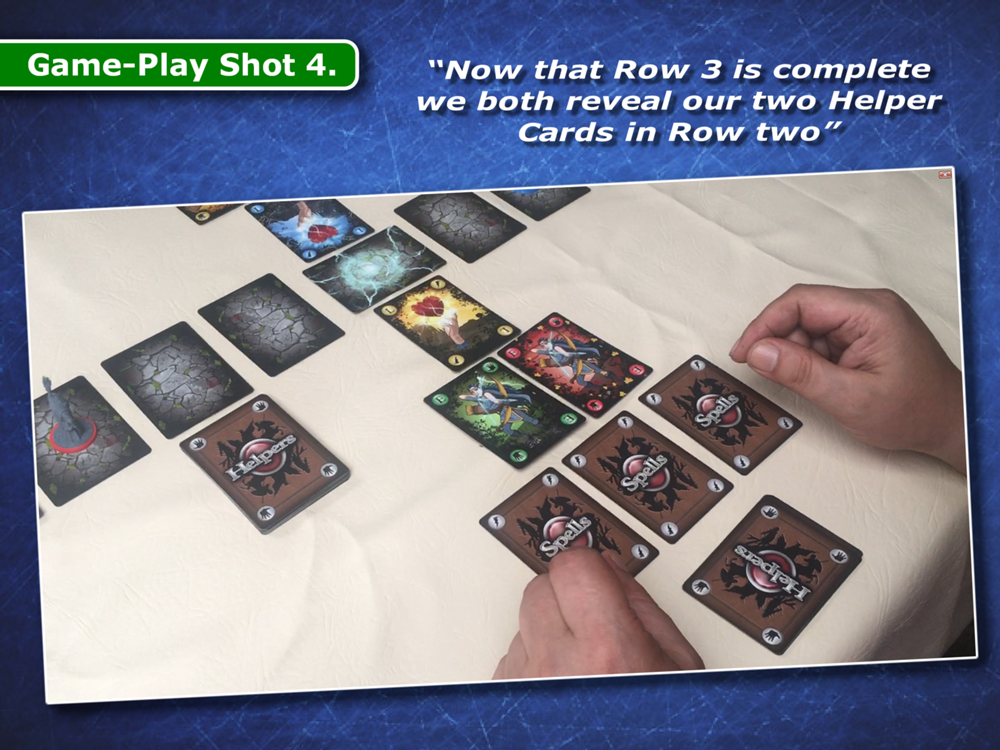 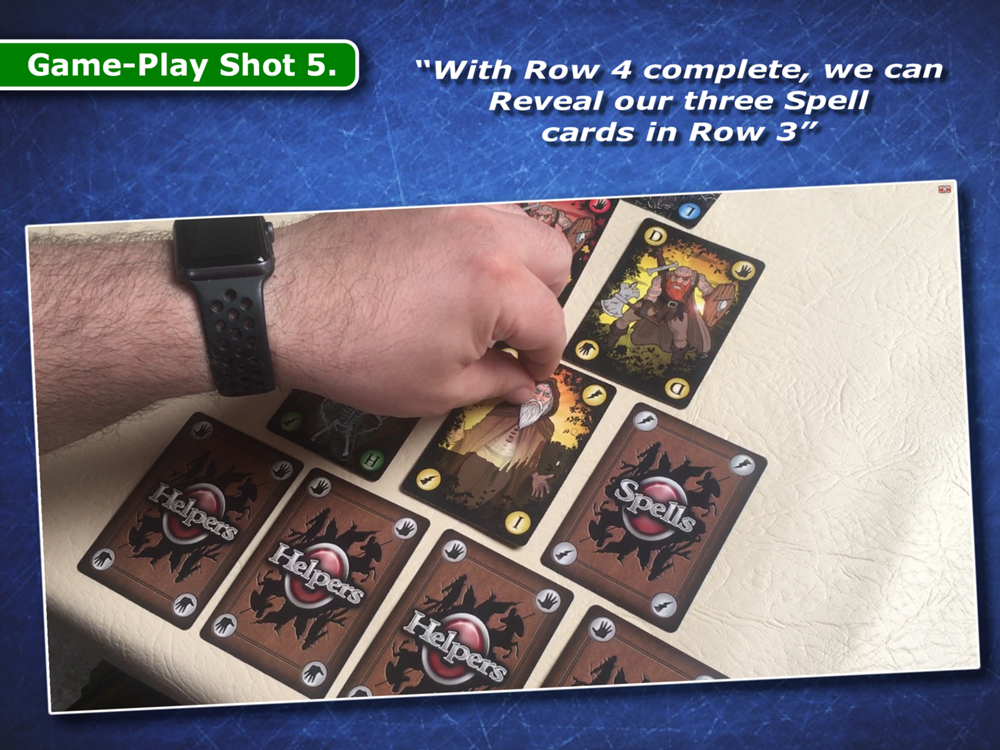 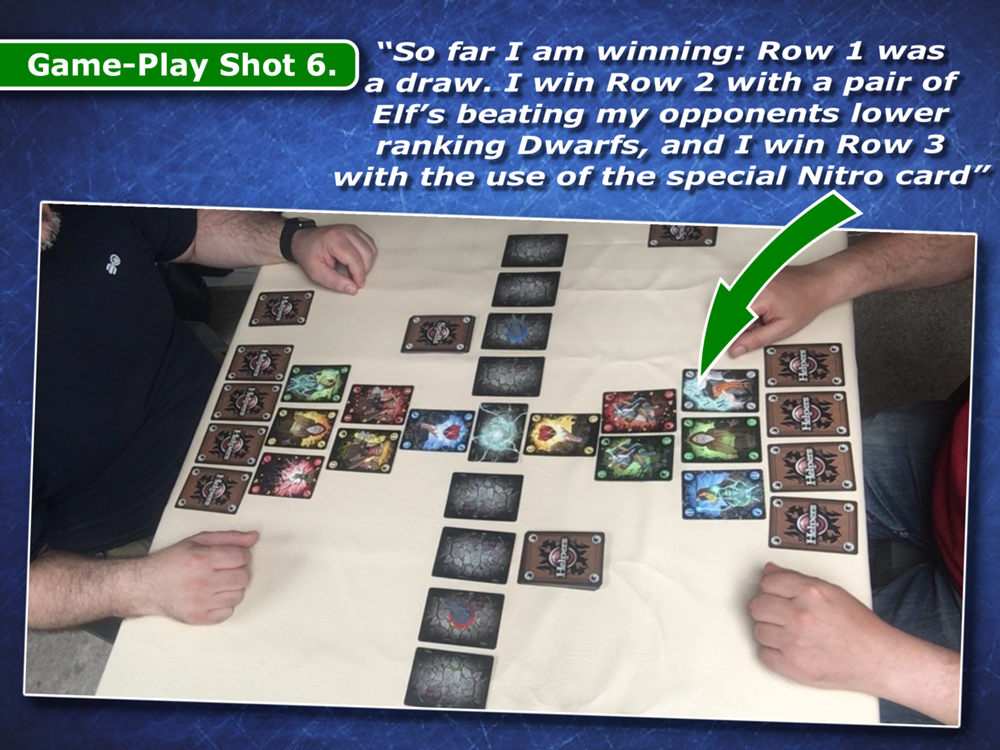 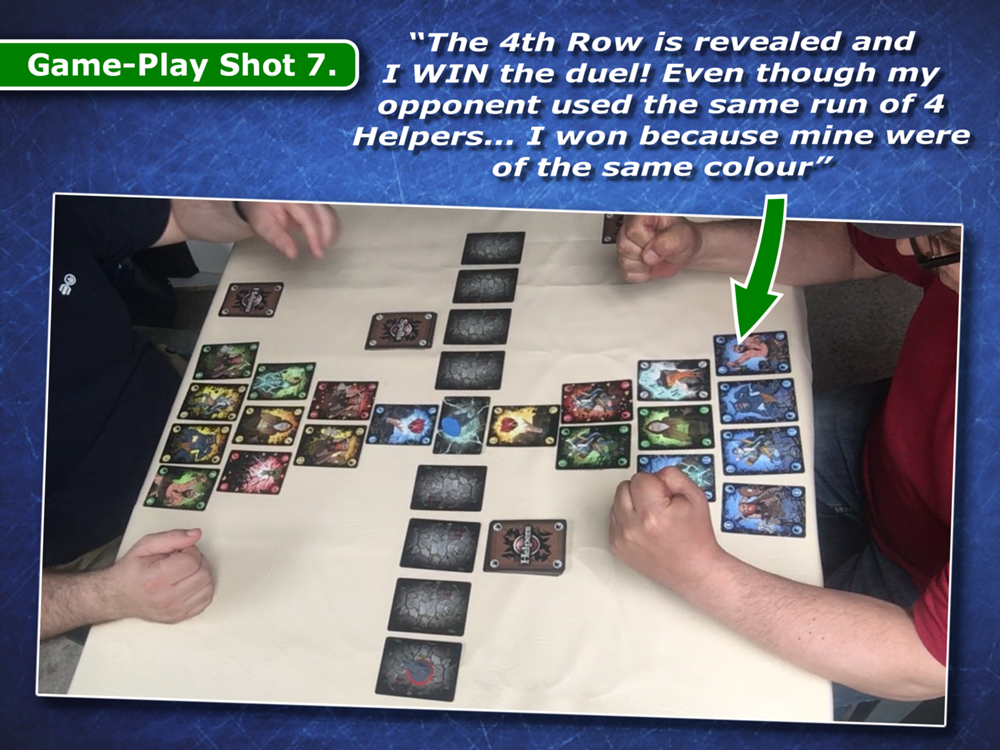 See inside the box!

This is my short unboxing video of the original proof copy from the Game Crafter. I have made some minor art changes to the Box design and Cards since this.

A brief history of Duelspell the card game:

This is the second edition of Duelspell, with now fully illustrated cards, rules and box art. It has been a passion project of mine (on and off) for over 4 years. This second edition will be exclusive to the Game Crafter.

Below is photo of the first edition which was designed for playtesting. 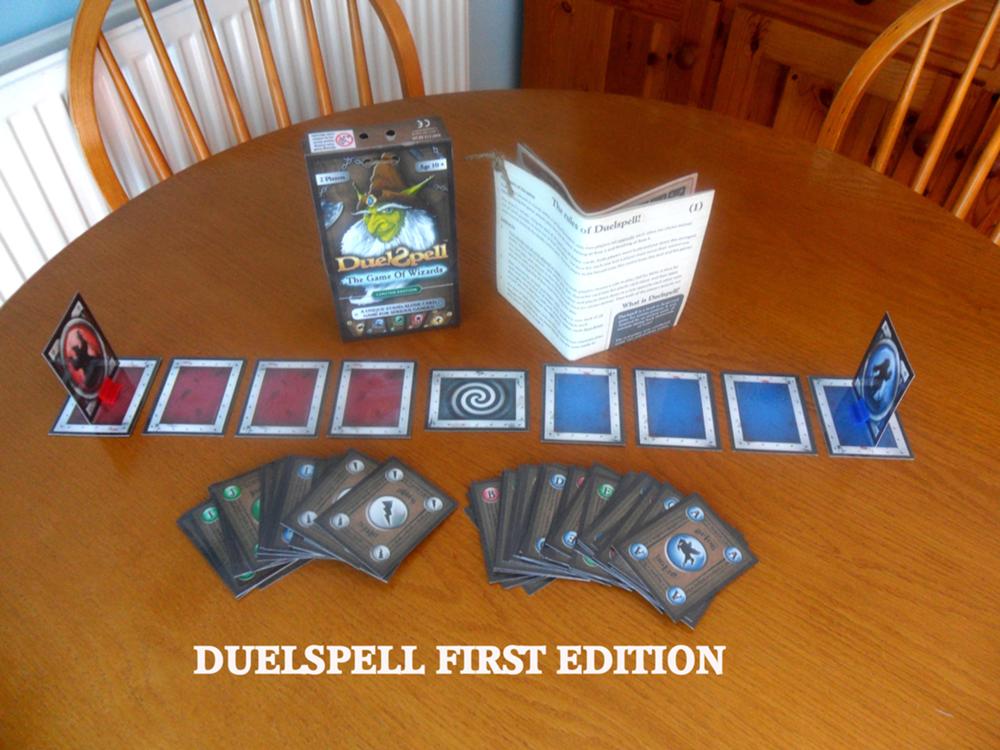 RE-DESIGNING DUELSPELL, HOW IT BEGAN:

Below is a short first video from a series I began two years ago, (which I have since taken down) where I discuss my goal to update all of the Art & Rules for the second edition of Duelspell. It also shows a brief overview of how the first edition plays.

HOW I UPDATED THE CARD ART FOR DUELSPELL, STEP BY STEP:

In this video (of two years ago) I discuss and show the process & progression of how I went about creating the art; (using the Game Crafter Poker Card Template) from pencil drawing to finished card design, for the Dwarf character in the game.

"Duelspell is exactly what is says on the box ‘a unique stand-alone card game for avid gamers!’. It’s a tactical but fun game to play for 2 wizards. Overall score: 5/5"

1
copies sold
$25.99
raised during this crowd sale
This sale has ended, but you can still buy the game.