Clash crazy card combatants against each other in the massive mad melee known as The Squirmish! 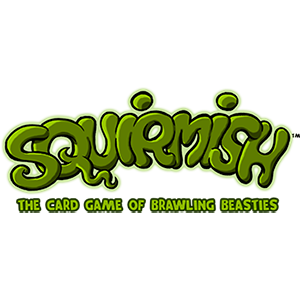 You’ll need plenty of luck, strategy, and silly scrappers to knock out three of your opponents’ goofy goons. The rules are simple… draw, place, move or fight, and resolve special abilities… but the unique cards provide infinite variety (and hilarity) to the gameplay.

The Squirmish Deluxe Set includes all 108 cards from Starter Sets A and B, as well as the rulebook, 4 6-sided dice, and a fancy cloth bag with 50 fancy damage counters for fancier fighting.

Squirmish is a fun alternative to mainstream character-battling card games designed to make kids buy packs and packs of cards to get the cards they want. The Squirmish deck includes all the cards you need to play and have fun… no buying endless packs of random cards necessary.

Learn more about Squirmish at squirmish.net

Don’t take our word that Squirmish is fun! Here is what reviewers have to say:

“Overall, I’ve had fun with Squirmish both with my kids and with adult players. I think it’s a lot of fun for families. The dice-based abilities mean that there’s still a good amount of chance involved, which gives less-experienced players a chance to take on more-experienced players, so gamers who want something with pure strategy may not like it quite as much. And don’t forget to shout your battle cries as you enter the fray!” – Jonathan H. Liu at Geekdad.

“Ty’s age, absolutely brilliant game. If there’s one downside, it’s the sheer variety.” – Russell at Board Gaming at Home.

“I like all the little characters that have been made up… they’re great fun.” – Kelly at Board Gaming at Home.

“It’s a simple card game, but it has a lot of meat to it… If you’re looking for a battling card game that you can introduce to people to maybe even get them into bigger and deeper games, this is a great introduction to do so.” – David at Sit Down Standard.

“It’s pretty straightforward and it’s quick to learn, but there’s a lot of different beasts and abilities.” – Alyssa at Sit Down Standard.

“I get several requests for Kickstarter previews every week. Recently, I was sent a request for coverage for a game called Squirmish that was designed by a gentleman named Steven Stwalley. My heart sunk a little bit when I saw the words “card” and “combat” in his elevator pitch, but that all went away when I looked over the art assets he gave me. Squirmish’s art is juvenile, obnoxious, and maybe even a little gross. In other words? I loved it.” – Stephen Duetzmann at Engaged Family Gaming.

“This game is made in direct response to collectible card games aimed at the pre-teen age group, such as Pokemon. There are battling monsters in this game, but unlike a collectible game, everything you need to play is included in one box. I’m a Pokemon Professor and Judge for the card game, so I was really very interested to try this out. It did not disappoint and actually exceeded expectations.” – Chandra Reyer at TSR’s Multiverse.

“I don’t know what to say other than you might like it and maybe others won’t. I am one of those who like it. I don’t think it will replace Pokemon for me, but it is much easier to carry around around than all my Pokemon equipment! It is not cute. However , there are some cute Squirmish monsters. Cawfeather, Opossrat, Killgor the Conquerer, Cupcake, and a few more. I say anyone 2nd grade to 9th might like it. The Battle Cries are really funny! But don’t attempt to make a Donald Duck voice for Pompaduck. Oh, and be sure to add Googly eyes. Heheheheheheheheh (^._.^)/ Keep on Gaming! Meow!” – Chandra Reyer’s Daughter at TSR’s Multiverse.

- If you buy a copy and email the receipt and your mailing address to info(at)squirmish.net, you'll receive a special bonus card in the mail as well!

- If you like the game, please consider reviewing it and letting folks know at boardgamegeek.com, thegamecrafter.com, and/or your social networking application of choice. Doing so makes you eligible for another special bonus card in the mail! Just email the link to the review and your mailing address to info(at)squirmish.net. (limit 4 special bonus cards per person).

SQUIRMISH™ is © copyright 2016 by Steven Stwalley. All rights reserved.

If you’re looking for a battling card game that you can introduce to people to maybe even get them into bigger and deeper games, this is a great introduction to do so.

8
copies sold
$263.92
raised during this crowd sale
This sale has ended, but you can still buy the game.