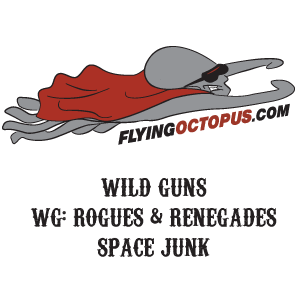 The dirt crunches underneath your boots.
Sweat drips slowly down your brow.
Your fingers twitch as you reach for your gun.
Seconds later your opponent lies on the ground, lifeless.
You advance to the final round of the Dodge City Gunfight contest.

Out shoot your opponent in this fast-paced, high action card game.

Overview
In Wild Guns, the players take on the role of some of the most lethal and skilled gunslingers to ever walk the dusty ground of the Old West. There deadly aim and firearm mastery is only matched by their cunning to avoid being hit by their opponent’s bullets. The problem is, if everyone is the “best of the best”, there is almost no room for error in this deadly game of reflex and nerve. Players will have to not only make choices that best utilize their gunfighter’s abilities, but also read their opponent and determine how best to dodge their volley of deadly flying lead. It’s a game of wit, skill, and bluffing with a heavy dose of luck that might let Fate smile on you or shoot you in the back. The town clock has struck 12, High Noon, and it’s time to draw!

The game play is intuitive enough for non-gamers to immediately grasp the game’s play, but engaging enough to keep gaming elitists entertained.

4
copies sold
$99.96
raised during this crowd sale
This sale has ended, but you can still buy the game.