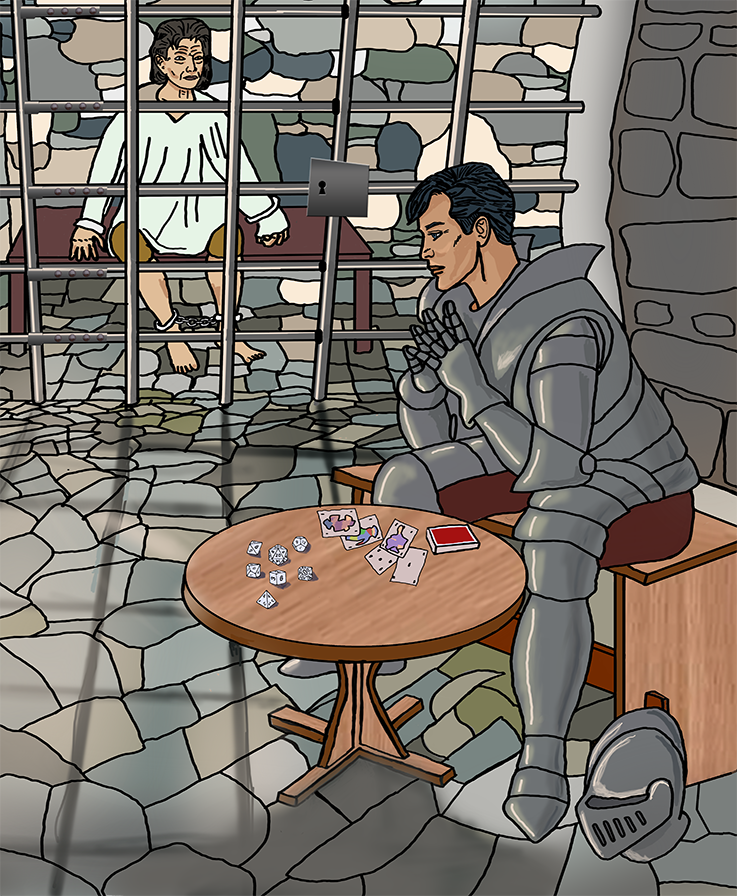 You spend day-in and day-out, sitting in this dank, dark, dungeon guarding a prisoner in a cell who barely has the strength to feed himself much less cause any problems. The boredom is real. It can make a guard like you go insane. So to pass the time, you always have your box of dice and cards – a true warrior against the enemy of boredom. Your burden is lightened at the mere thought of it. So spread your cards and roll your dice. You won’t even notice the time melting away.

Guard Games is a set of five solo dice and card games for the bored dungeon guard in each of us. The games included in Guard Games are easy to learn, fun to play, and don't take up a lot of space. Here's what you get: 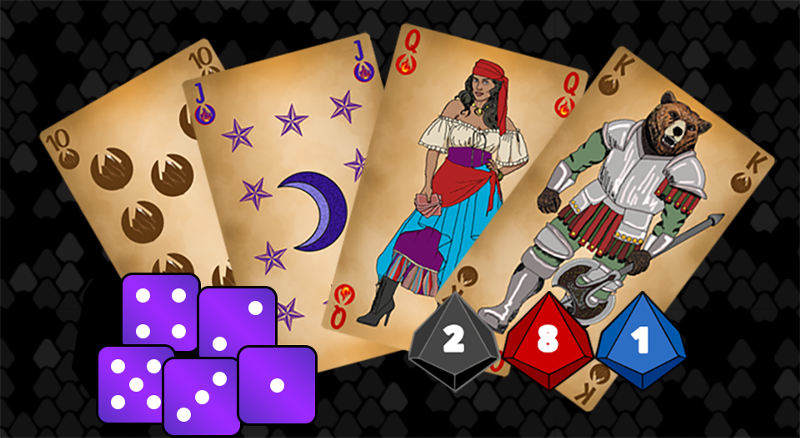 Guards don't get paid much, so let's roll the dice and see if we can Fill the Coffer and buy something nice for ourselves, for once.

Fill the Coffer is a solo dice game that involves matching pairs to get the high score. Not so fast! There are also things that take money out of the Coffer: A gold piece is fake and has to go in the Midden (aka trash) and the local Temple occasionally takes a tithe! How much gold can you save?

A guard's duty is never done - and always underappreciated. It is time for the four Queens of the Realm to hold Court. Can you make sure the Nobles are separated from the riff-raff and are in their proper place in the Queen's Court?

Queen's Court is a solo card game that uses ascending and descending sequential cards around the four Queens. When all the cards around the Queens are Jacks or Kings, the game is won and all the Nobility are in their proper place. I'm sure the riff-raff are there as well - way in the back - somewhere.

It's almost time for the Shift Change. Your shift in the dungeon jail is almost over. Can you get everything ready for the next guard to come on duty? Let's get it done. I know you want to get out of here as bad as I do.

Shift Change is a solo card game that uses multiple foundation piles in two sets, one set going up - the Off-Duty Guards waiting to start their shift, and one set going down - the On-Duty Guards who are getting ready to go home. Stack the piles sequentially from the 13 cards in your hand or from the top of the rest of the deck - one card at a time. When the up and down sets meet in the middle, a Shift Change is complete. Can you complete every Shift Change?

Today is the day the prisoner's go before the King to plead their case, some will be lucky enough to be given an opportunity to pay a fine in the form of Bail Money. Others, well, we won't talk about their fate. Can you help all of the prisoners raise their Bail Money to get out that jail cell? Come on. Be a decent guard. Help them out!

Bail Money is a solo card game that works from multiple foundation piles - your Prisoners on Trial and the rest of the deck (face-down) - your Waiting Prisoners to match pairs of cards whose values sum is 13. This game features a simple layout with quick and easy gameplay! How much Bail Money can you help raise? Can you get all of the prisoners out of jail?

We won't talk about how that bag of Dragon Scales came into your possession, but now that you have it, what will you do with them? Well, the first thing you will need to do is get them polished. No one wants dull lackluster Dragon Scales.

Dragon Scales is a solo card game that requires a bit of math. You have several foundations that represent your pristine polished Dragon Scales. Work through your deck to put scales in the polished piles which are done in varying mathematical sequences of multiples or put them in the secondary foundation piles of Unpolished Scales to be polished later. Work through the Bag of Scales (the rest of the deck) until they've all been polished.

Guard Games is perfect for any idle time and makes a great gift for teens, college students, and anyone with a little bit of free time.

Grab yours today and start beating the boredom away!

Learn more about Worlde of Legends™ at WorldeofLegends.com