Outbid and outsmart your opponents in this all-in bidding card game. Score adorable groups of animals (worth 1-7 points) at the center of the table using numbered Bamboo Cards in your hand. Combine your bids with sneaky Effect Cards such as "Next Is Invalid", "Double Points", "Random Card" and many more! 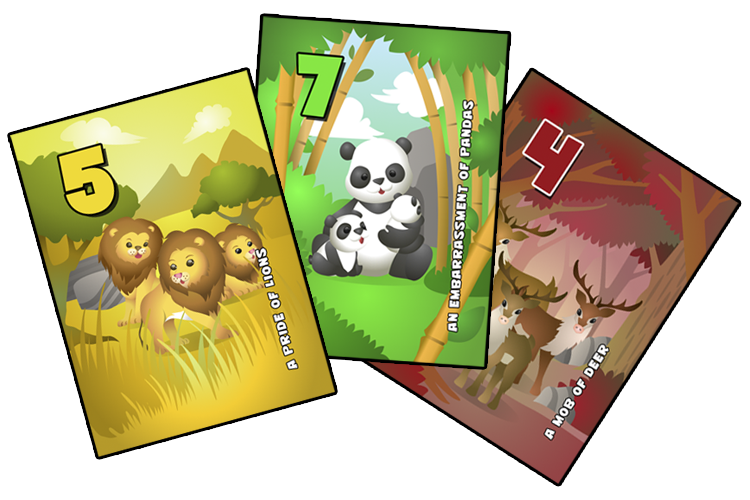 Don't let the cute artwork fool you though. This is a CASUAL BUT DEEP game where every decision matters.

Bids are placed blind in piles face down. Cards are then revealed one at a time around the table creating some hilarious situations as cards interact with one another in unexpected ways. Bamboo Cards add to your bid value while Effect Cards have you perform special actions.

Highest Bidder: Animal Kingdom utilizes PROGRAMMED ACTIONS as a core game mechanic. Once you've laid down your desired cards in your bid pile the order cannot be changed, and the bid will play out as cards are revealed one at a time around the table, often with hilarious outcomes as they start interacting among players.

As if the base game wasn't enough, the game box also includes 35 "ADVANCED PLAY" BONUS CARDS. These are easily identified by a yellow panda symbol and can be removed or mixed & matched to your liking. The game also comes with a second rule booklet introducing the new cards and some rule tweak suggestions for hours of replay value.

The Score Boards seen in some of the photos are an extra add-on. You can easily keep scores simply by keeping the animal cards that you collect in front of you, but the boards make it easier to see the total scores of all players at a glance.

The boards also have a cool PERKS SYSTEM giving you four special abilities (including drawing extra cards and skipping bids to save cards) that can be used once per game.