The Solo Sandbox RPG in a PDF.

With paper, pencil, and dice, Lone Wilderlands contains in one box everything else you’ll need to create a unique realm of open-ended fantasy adventure, a world of varied terrain, settlements, castles, quests, and battles. Guide a character and the list of allies, enemies, and places visited will grow, prompting new stories and twists. Cards and dice drive the obstacles and adventures as would a gamemaster. Change the course of cultures and settlements as you explore the wilds and upgrade characters completely on your own or with a group. But don't feel left out, gamemasters. Lone Wilderlands is also a no-prep, impromptu, world-building and story-generating engine, and it's adaptable to other RPG systems.

PLEASE NOTE: THIS THE PRINT-AND-PLAY VERSION OF THE GAME.

YOUR PURCHASE GIVES YOU ACCESS TO THE FULL GAME IMMEDIATELY, BUT IN PDF DOWNLOAD FORMAT ONLY. YOU DON'T HAVE TO WAIT FOR PRINTING AND SHIPPING.

Prefer the boxed version? Here it is!

For an adventure with a story, see the boxed expansion set Adara's Atlas: Monster in the Moat, also in print & play version.

These how-to videos show a past version of Lone Wilderlands. Rules are the same, some components are upgraded. For example, Codex and Monstro have been replaced with the more detailed and accessible Summa Cartis instruction manual. Updated videos are in the works. Enjoy!

The Game Crafter has the dice you'll need here: D20

20 Wilderland cards to generate a realm.

LEGO® is a trademark of the LEGO Group of companies which does not sponsor, authorize, or endorse this game. Visit the official LEGO website at Lego.com.

Mega Bloks® is a trademark of MEGA Brands, Inc. which does not sponsor, authorize, or endorse this game. Visit the official Mega Bloks website at MegaBloks.com.

BrickForge® is a trademark of BrickForge which does not sponsor, authorize, or endorse this game. Visit the official BrickForge website at BrickForge.com.

Once you crack open the box you find that it is an exciting RPG system that can be used independently or with any game system out there, and that lets you game on the go without expensive books. 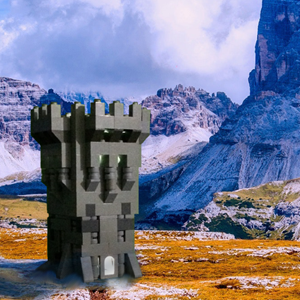