A card game about building giant robots to dazzle your professors at the Robot Science Fair!

Welcome to Robottery 101, a card game about building giant robots at space college to dazzle your anime professors at the annual Robot Science Fair!

Fantastic for both kids and adults, Robottery 101 emphasizes the values of building and bonding, bringing players together in an experience that’ll leave a smile on your face while you admire your colorful robot creations. So get your toolbox ready, spin up your power drill, and get ready for an upbeat robot science fair where you can appreciate robots for robots’ sake!

It's the year 4000.... The sounds of whirring drills, buzzing saws, and massive metal footsteps fill the student workshop. That can mean only one thing: it's time for the Giant Robot Science Fair! In this high-energy set-collection card game, collect robot pieces from across the galaxy, collaborate with your peers, and scheme against your rivals to create the coolest robot you can for the University of Robottery's annual science fair!

For a full PDF of the Robottery 101 rules, click here!

Four players are engineering students at the University of Robottery who build giant robots for the annual Robot Science Fair. Whichever student builds the most impressive robot wins the game. Each turn you will travel to planets across the galaxy to collect parts you want for your robot, represented by Limb cards.

Limb cards have two qualities - color and body part. They connect together to form complete robot limbs. You attach robot parts to your core in an anatomically correct way - example, you need an upper arm already on your robot to place a lower arm on as well. If you cannot attach a part to your robot, it goes in your inventory. There are also head cards that add additional point values to your robot. 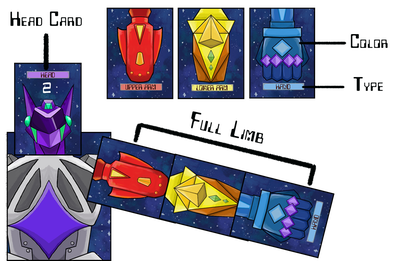 Professors will want to see certain combinations of limb cards for the professor to favor your robot. Each professor has a certain number of gears indicating how many points they are worth.

Every two turns, your class convenes for a Study Session, during which you can trade any parts you have collected with the other three players. During this time, you may attempt to steal parts from other robots through a sabotage. To attempt this, role an eight sided die to see if your professors catch you cheating - sabotage gets increasingly harder as the semester progresses and due date approaches. If you succeed, you replace a part on their robot with the same kind of part from your robot or inventory.

The game ends after eight turns, and the professors judge whatever robot you have built over the semester.

Robottery 101 started as a personal project called “Space Junk,” a cooperative puzzle board game where two aliens use space junk and salvaged blueprints to construct a giant mech. Since then, generating wonder, excitement, and joy is at the forefront of our team's design. More than anything, we are hoping to make great games that inspire people’s passion and excitement.

As a team, we’ve spent many weekends wearing professor lab coats and getting pumped to Gurren Lagann music to give us strength during crunchtime. After countless late nights in our college’s game design building with bowls of ramen and passion in our hearts, we are very happy with our results. We hope you feel the same joy building these robots as we do!

You'll want to keep playing over and over since each game poses different challenges. Robottery 101 is well thought out, designed and produced. You won't be disappointed!