A perfect Game of Trojan War!

These cards, designed by Jenks of Greek Myth Comix, are the follow-up to the incredibly popular 'Deaths in the Iliad' Infographic by the same author.

The four suits correspond to four groups of characters in the Trojan War, particularly Homer's poem The Iliad: Argives (Greeks), Trojans, Gods, and Women. The face cards are illustrated with a colour representation of two facets of these main characters, while the number cards picture the character at a critical, recognisable moment in the text or the Trojan War story, in the same vivid line-drawing style as the acclaimed Greek Myth Comix.

These cards, designed with real play in mind, are UV coated with a linen texture, to make them last as long as the Trojan War itself (probably). Ideal for Poker, Blackjack, and countless other regular card games, they are also perfect as flash cards for revision of these characters in class with students, or for acting out your AU Song of Achilles fantasies!

The cards come in an illustrated tuck-box that utilises the deck's unique back design, inspired by the images of warriors off to war on the Mycenaean-era Warrior Vase.

A perfect gift for any young scholar, classics fan or Iliad nerd!

CHARACTERS IN THE DECK:

two of the nine Muses 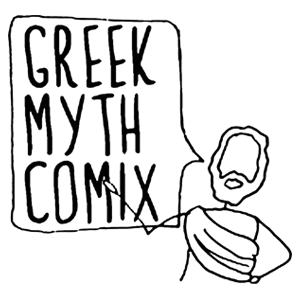