When Empires Clash, Only One Victor Can Emerge

For the past 10 years, the kingdoms of Arctusa and Caelus have been engaged in a bitter and bloody war. Blood has been shed on both sides and the war’s death tally has created a mountain of corpses that casts a grim shadow over every battlefield. Now, with forces depleted in both armies, one final battle will take place on the plains of Edolum to determine which kingdom will emerge victorious. After today, one kingdom will stand alone atop a pile of bones of the enemy, while the other will have its name erased from history forevermore.

The purpose of Vanquish is simple. Two players battle one another in hopes of conquering the opposing player’s army. Thus, the game can be won in two ways:

1) A player kills the opponent’s Emperor piece;
2) The opposition admits defeat and surrenders when they deem there is no way they can win the game.

Vanquish is a turn-based game where players move pieces around a board with 64 squares. Movement is based upon the roll of a di and pieces possess unique Attack Points, Defense Points, and Attributes that dictate their performance on the battlefield. As the pieces of your opponent fall, you gain cards that can be used to decimate your opponent's army on future turns.

There are no stalemates in Vanquish. Similarly, there are no draws, ties or peace settlements. Only one winner can emerge.

IMPORTANT NOTE FROM THE GAME DESIGNER

This is the First Edition of Vanquish. In future editions, I would ultimately like to include a large board with artwork as well as artwork on the box. This First Edition has been published in hopes of gauging consumer interest before devoting funds to more expensive components. With this in mind, your feedback of the game's quality, playability and areas for improvement would be appreciated. 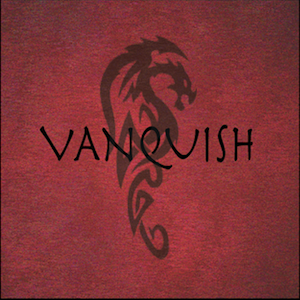