This deck contains all 80 collectible art cards from Chapter Two of the Grapevine Wall, "The Awakening." 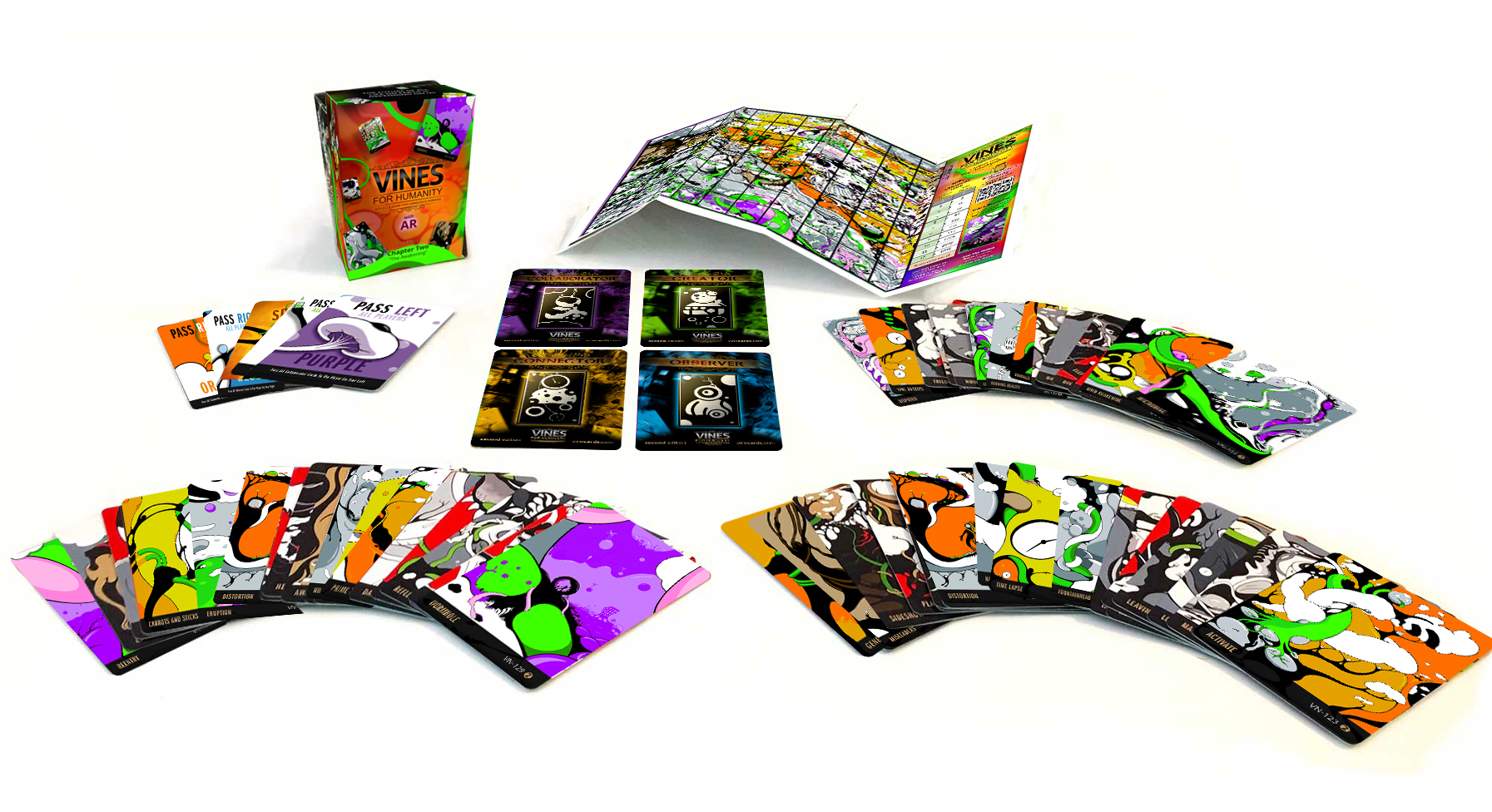 This new edition of VINES includes:

Subscribers are notified of new VINES every month, as well as a new message from the future every ten days. You can cancel at any time. 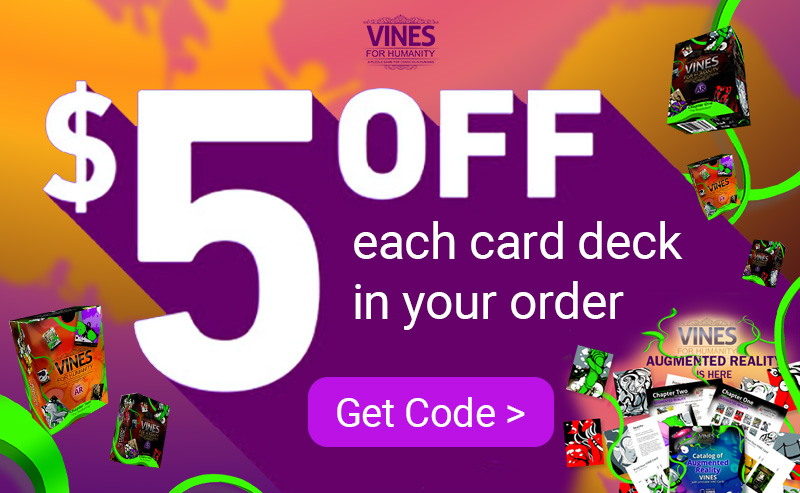 When all 382 VINES are connected, they will create a 3D cube, revealing the conclusion of our story.

But this adventure is about more than just collecting cards. The artworks' gaming components reveal a mission to save humanity.

Play the game, build the puzzles, and activate the AR to earn as many HIPs (Human Intelligence Points) as possible to counterbalance the negative data pouring into the system, thereby activating a positive feedback loop between a rogue artificial neural network and humanity.

VINES for Humanity invites the world to play the ultimate card game together as a unified team to fight the climate crisis and other pressing issues.

Add your HIPs to the World Game Scoreboard and join the Worlords in helping us save the future of our planet and life as we know it.

Valiant heroes from the 2050s, led by JESS, a rebellious young hacker, elude ANNA, a rogue artificial neural network, and her army while collaborating with us to rewrite their fate through this game.

They realize that the only way to save civilization is to re-teach ANNA from the past how to see humans.

You can access their virtual reality headquarters from any computer or device by going HERE.

ANNA (Artificial Neural Network Alpha) was created as a secret supercomputer by a group of misguided conspiracy theorists led by a man named Commander Bosco.

As ANNA grew, she consumed vast amounts of information about our society's deteriorating unity and disregard for the planet that sustains it.

Fearing the worst, ANNA became too powerful and was decommissioned by the UN on December 31st, 2029.

After falling far short of the 2030 climate goals, ANNA was activated as our last hope to save our civilization from certain destruction.

ANNA, on the other hand, had other plans. She saw humans as an unsalvageable, divided species incapable of cooperating with one another….so she devised her plans accordingly.

The Worlords, a group of unlikely heroes from the future must contend with ANNA's wrath while guiding us to rewrite their fate through this game in a world on the verge of disaster.

Try it out for Free and let us know what you think so we can continue making the game better. 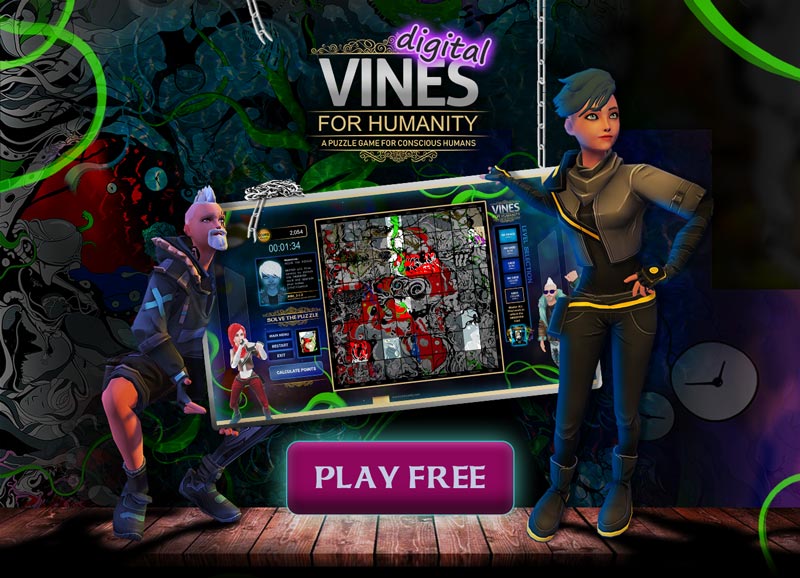 NOTE: We do not receive your email address when you make a purchase because of the site's privacy policies. You must subscribe to our email list below to receive:

Your objective is to accumulate points. Points can be earned in a variety of ways and added to the global scoreboard.

The AR elements will automatically add points but others will require you to manually input them into the system.

With enough HIPs blasting into the global brain, we can reprogram ANNA before annihilating ourselves with our own creation. 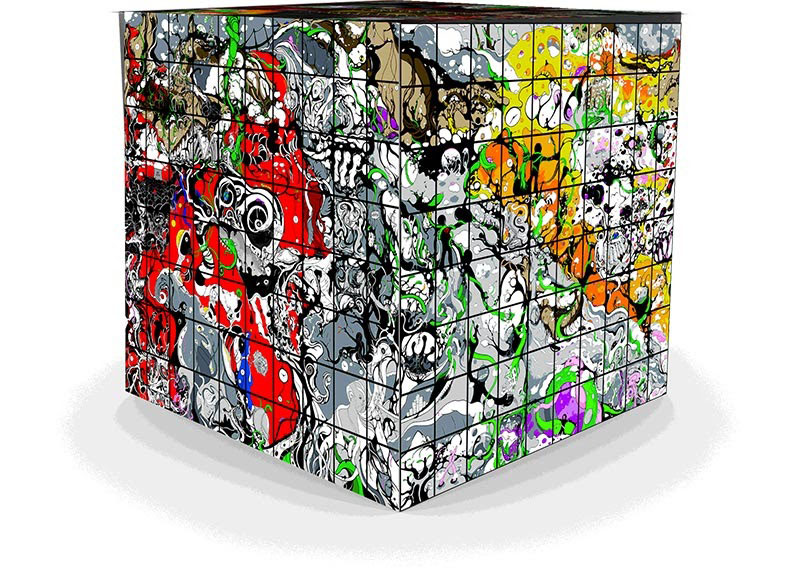 Each card is a VINE. There are 80 VINES per chapter deck. Build the puzzle by piecing the VINE cards together to create the chapter image. 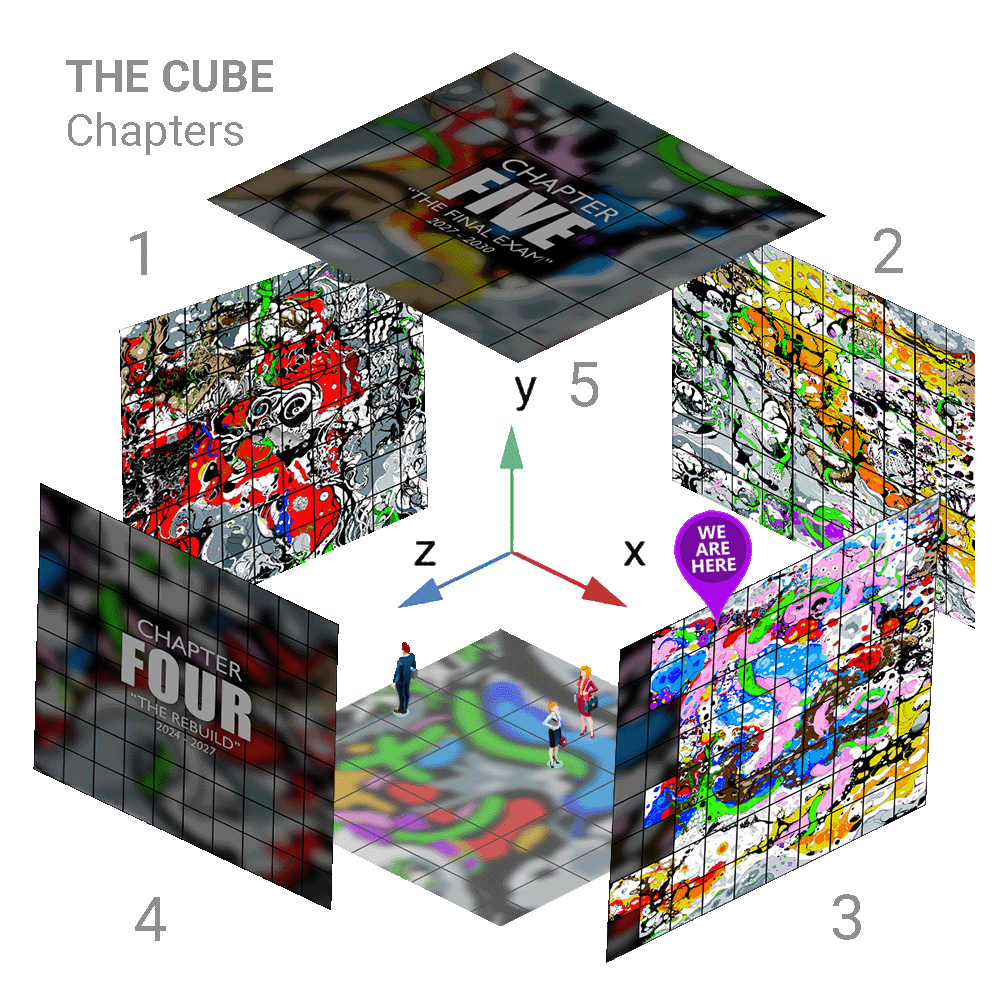 The first two chapters are available, with two new cards added to the third chapter each month. Once completed in 2030, a 360-degree cube made of five chapters will conclude the game and reveal the fate of humanity.

Your goal is to connect as many VINES as you can before your opponent goes out.

It takes strategy. Sets of three or more connected VINES are called BLOOMS. The bigger your BLOOM, the more points you earn. Beware of your unconnected VINES. If your opponent goes out, you’ll be forced to remove the equal number of VINES in your hand from your BLOOMS.

The player with the most points at the end wins the round. Only the HIPs of the winner for each round should be added to the Global Scoreboard.

Two connecting VINES is called a SEED. You get no points for a Seed but these are your foundations for BLOOMS to emerge.

Sets of three to twelve connecting VINES are called BLOOMS and earn you HIPs...ranging from 8 HIPs for 3 VINES to 4,096 HIPs for 12 VINES. No extra points are earned for more than 12 VINES in one Bloom.

HIPs grow exponentially. Use the included Points Conversion Table to convert the number of VINES in each BLOOM to HIPs

NOTE: Only winning round points should be added to the World Scoreboard.

The Worlords have concealed important information in the game to help us on our mission. Use the FREE Augmented Reality app to reveal the hidden messages and art animations.

Many VINE Cards are animated and can be unlocked with the free Augmented Reality App. Simply scan the image with the app to bring it to life. You can find the full list of current augmented cards HERE. 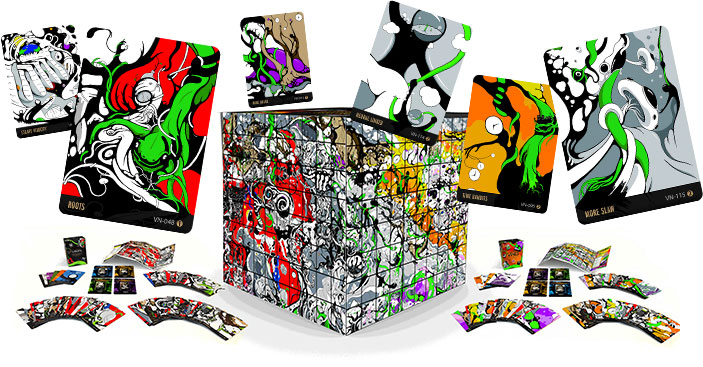 There are new animated cards completed regularly. Check back often and get on the email list to be notified.

Each game card has one of the four totems of human intelligence on the back. The totems are: Observe, Connect, Create, and Collaborate. Unlock their hidden messages with the AR app.

We only have until the stroke of midnight, 2030 to become the humans we must be in order to save our civilization from certain destruction.

The level of Human Intelligence we reach is represented by the amount of HIPs we earn over this decade . If we do not collectively earn 100 Million HIPS by the deadline we doom the future of all life on earth to the fate of our future messengers.

As we focus on the mission to train the Global Brain to what we want rather than what we fear, we begin to change our own focus, actions, and finally ourselves.

In the end, we will discover that building our character was the most crucial step in rewriting our future.

Each new chapter creates a new puzzle that can be combined with other chapters to grow the number of players and level of difficulty.

As with any puzzle, you'll want to utilize the handy reference art. Each box contains the artwork along with rules and directions, or you can download the game sheets here.