Beetle Get! plays up to 1 and a game can be completed between 5 to 10 minutes. The game mechanics themselves are fitting for 6+, but the strategy on which patterns to use now, when to use later, which to sacrifice to get beetles to be face up, are all things that can get the brain chugging along for more seasoned players.

How to Play Setup

Players shuffle the Beetle cards and lay them out in a 3x3 grid. The player then chooses 4 cards to flip up so the beetle side is showing. Shuffle the Pattern cards to form your draw deck and now you're ready to go!

Draw 2 Pattern cards and pick 1. The one not used goes to the bottom of the Draw deck. Now choose a section of the beetle grid that matches the pattern on the card. Whatever beetles that are face up score.

Sum up all the beetles that are face up for your score. Mark off any beetles for set collection bonus. Now flip all the cards (including ones that were face down) that were in the pattern.

The beetles don't just stay in one place above or below the ground! Shift any column or row of beetles, the one that moves off the grid looping back to the other side. Now it's time to start your next turn! Game ends when all Pattern cards are played. 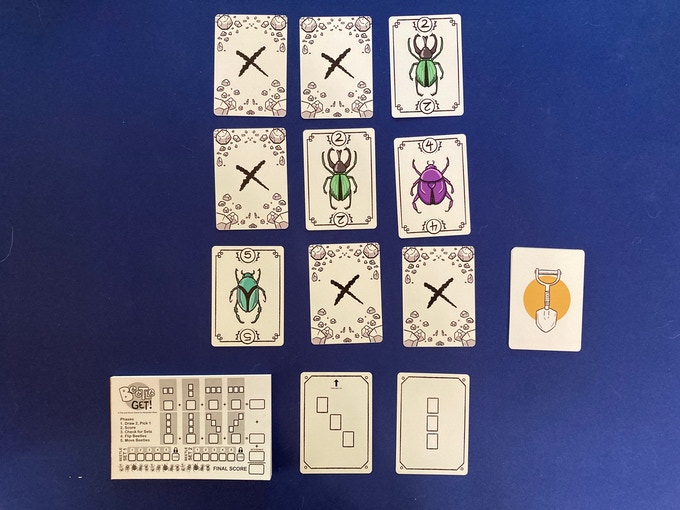