In the early 20th-century, rival steamship lines fiercely competed for speed, luxury, and profit. The legendary Blue Riband award was the greatest prize of all, won by the passenger ship with the fastest westbound transatlantic crossing.

In this game, you’ll design and operate your own steamship, with one player as Lusitania and the other as Titanic. The real-life Lusitania was built for speed and won the Blue Riband in 1907, while the real Titanic offered spectacular luxury. Both ships met with disaster—Titanic struck an iceberg on its maiden voyage, and Lusitania was torpedoed by a U-Boat. Now you’ll rewrite history by making your own design choices. Compete against your opponent and try to avoid the fates of the real Lusitania and Titanic!

You have two paths to victory: speed or luxury. Focus on one strategy, or try for both at the same time. In the first part of the game, you'll act as a ship designer, competing with your opponent to build the fastest and/or most luxurious ship. Build your ship by placing design cards that can increase your ship's speed, luxury rating, safety level, and profitability.

In the second part of the game, you'll captain your ship as you and your opponent race across the Atlantic from Southampton, England to New York. Set your speed by deciding how much coal to burn each day, and contend with hazards including icebergs and a U-Boat. Try not to sink or become stranded along the way! The first ship to reach New York wins the Blue Riband award, but you can also win the game by having the most luxurious ship. You earn bonus points through financial profit.

The game materials are based on historic, public domain photographs and drawings from the early 20th century. Most of the images feature Titanic, Lusitania or their sister ships. Close-up images of the game boards and examples of completed ships are included in an appendix to the Game Rules PDF file.

The game draws well on its theme and the public domain resources which should appeal to anyone interested in the Titanic or Lusitania. 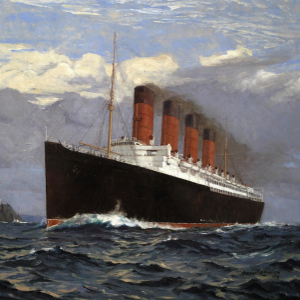