Yes dungeon cards can be used in other game modes!

The videos provide a good sense of how to play in "adventure mode" but do not fully reflect the rules in its entirety. For gameplay specifics, refer to the rule book. 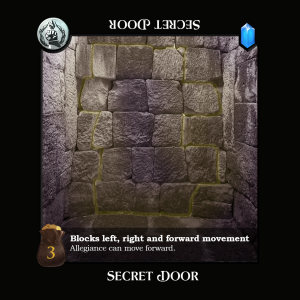 The Mines of Taas Dungeon Terrain Cards are an accessory that allows you to play Heroes of Karth: Deathmatch in adventure mode. This accessory pack only comes with dungeon terrain cards. You need at least two starter decks (The DM should play using Shard Cards). You also need at least 14 red dice to manage damage and a method to track gold, kills and mana.

The Deluxe Edition has all the dice and gold needed to play! For $39.99 the Basic Edition features the Archer and Spider Decks with red dice to manage damage. You can also buy dice and gold separately.

Play Heroes of Karth: Deathmatch The Mines of Taas™ in six easy steps:

This game comes with the Warrior (Allegiance) and Necromancer (Shard) Decks and the Shard is the Dungeon Master and gets to build the dungeon. Any Deathmatch deck can be used to play in adventure mode though and it is generally more fun to use different decks when playing with 3 or 4 players!

Sort the deck into Barracks, Spellbook, Treasury and Token piles. Then get your starting cards and gold. The Adventurers get 5 gold and draw 5 cards each. Tokens do not count as part of the card draw nor do terrain cards. The Dungeon Master (DM) gets 5 cards and 5 gold per Adventurer. If there are 3 opponents then the DM starting gold and card amount would be 15 gold and 15 cards.

Step 3: Determine who is the Adventurer and who is the Dungeon Master

Players alternate turns with the DM going first. To start the turn players draw 1 card and get 1 gold. Then they assess the cards in their hand, manage their resources and hire units into the Dungeon.

With cards in the Dungeon each one can have a turn. But before managing the cards, a new turn means a new card draw and new gold which can be used to add more cards in play. Cards already in the dungeon also add to the Spiritual Energy (mana) global total.

The dungeon excursion rages on with each player carefully managing their resources and their units' turns until 1 player earns victory by being the first to accumulate either 40 unspent gold or 25 Kill Points!

In multi-player mode the gold win condition is higher depending on the number of players. Check out more info on the rules and all our products at www.heroesofkarth.com.