Strategy game: "Culture" the most bacteria cards while trying to knock out opponent's cultures!
Get ready to get cultured in the microbiology lab!

You take the role of a microbiologist who’s just discovered a new strain of bacteria. Culturing it on an appropriate petri dish, your bacteria suddenly begins to mutate, spawning all new strains! You race to culture as many new strains as you can, but other microbiologists have the same idea, and in this game they fight dirty, spiking your media with antibiotics, while trying to protect their own! Who will emerge the leader of the lab and culture the greatest variety?

Dr. Arch’s Mutations is an educational game (scary, I know!) designed by a Ph.D. to teach students the basics of microbiology, at home or in the classroom. It features core gameplay that is quick and easy to learn, with four strains (colors) of bacteria, but enough variety to keep even the smartest players hopping, with Antibiotic attack cards and Random Events which can change the game in an instant! Each of the bacteria cards - 56 in all! – contains a basic fact about microbiology, which when taken all together is as complete as a short course! Even if you aren’t a science student, the game contains many facts that everybody should know – why do antibiotics work? What is the best disinfectant? – and the gameplay is fast, competitive, and fun, no matter who you are!

Enter the world of microbiology…with Dr. Arch’s Mutations! Have fun and learn in one!

(Note: The game comes with a six-sided, numbered die; however, a custom die with color spots (as the cards are designed for) is available for free! Contact me via my email address, and I will ship the color-spot die at no charge to you!) 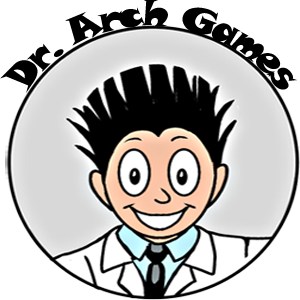