The Tarot of the Dead is a full color 78 card Tarot Deck inspired by the Mexican Day of the Dead (Dias de los Muertos), and created by Austin, Texas artist Monica Knighton. In the tradition of the holiday, the human figures on the cards are represented by skeletons. The suits are as follows:

Originally self-published in 1999 by Monica through No Borders Studio, the first edition decks came in a black windowed box and included the 22 major arcana, 56 minor arcana,Plus 2 title/end cards, and an English/Spanish instruction pamphlet. The size of the of the first edition cards and design of the suits allowed the deck to be used as a playing card deck as well as for divination.

The Game Crafter 'Blue' edition features new card back artwork and a link card to color ebook guides in English and Spanish for phone or tablet. 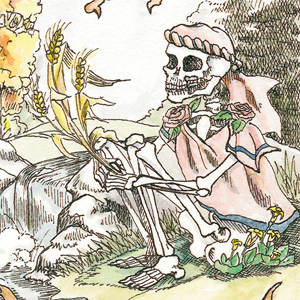