Good 'Ol Punchin' Planes has not been fully proofed.

The Fight That Takes Flight

"I remember back before the great war, we didn't have any fancy machinery guns to add to our two-winged air-scrapers. So, when two hot-shot fly-boys needed to settle their differences, they grabbed a buddy and had them duke it out mano-a-mano on the wings of aeroplanes. Those crowds would sure hoot and holler as we flew nearly 50 mph to heights of almost 30 feet. You kids wouldn't remember those days. So, I made this paper and card game-set box to show you nancies how we used to do it. Back when flying and racing was pure.

Did I say racing? Why I can't really remember why we were racin' too. But, hell, that's exactly how I remember it, so that's how you're gonna play it. The old-fashioned way. We called it "Punchin' Planes" and that's how it was." ~Grandpappy

In "Good 'Ol Punchin' Planes" players relive the days of early Pre-WW1 aviation. The days when the only way to fight was to have a buddy stand on your wing and engage in fisticuffs (machine-guns were too heavy, or course). Through the use of dual-purpose action cards, players have to navigate obstacles on the modular race-track while their fighters spar on the wings of their planes. Will you win over the crowd and cross the finish line or go down in a ball of flames?

Play is fast and actions are revealed simultaneously. While the game uses a rock-paper-scissors mechanic for fighting (punch, kick, grapple), there is always the option for the losing player to "trade blows," essentially turning the tables. But, since cards are not always drawn each turn, losing a battle may sometimes be more beneficial than winning. With obstacles that bring players one step closer to explosion, hand management, and plane positioning complicating each situation, "Punchin' Planes" is a short game for 2 players with a surprising strategic depth.

From the designer of "VivaJava" (set for release mid-2012 by Dice Hate Me Games), a euro-style game of forced cooperation for 3-8 caffeinated individuals. For more info on Dice Hate Me and their game line-up, visit www.dicehateme.com. Also check out their new game "Pulsar", which is available through The Game Crafter, and "Carnival", set for official release later this year. 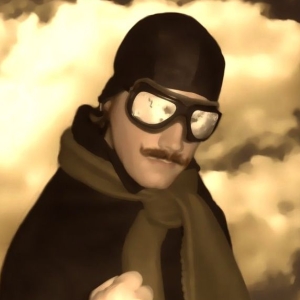