A bidding war for couples in love <3

Outbid and outsmart your loved ones — whether friends, family or a spouse — in this all-in bidding card game. Score Hearts at the center of the table using Kisses from your hand. Surprise your loved ones with sneaky Effect Cards such as "Next Is Invalid", "Steal a Kiss", "Random Card" and many more!

"Highest Bidder" is a well-tested and enjoyable series of card games that come in a variety of themed editions. This "Valentine's Day" version contains a new game component in the form of a card (called the "Broken Heart") that moves between players. Having the Broken Heart in front of you when you win a bid will cost you points! This new game mechanic has not been fully tested, and therefore I am now offering the game with near-zero profit (zero profit is not possible in the game editor) for myself in the hopes of getting feedback from the first people to buy it.

You are encouraged to send your feedback to: spel@strackspel.se.

Thank you in advance for your help & support!

Bids are placed blind in piles faced down. Cards are then revealed one at a time around the table, creating some hilarious situations as cards interact with one another in unexpected ways. Kiss cards add to your bid value while Effect Cards have you perform special actions.

Highest Bidder: Valentine's Day utilizes programmed actions. Once you've laid down your desired cards in your bid pile the order cannot be changed, and the bid will play out as cards are revealed one at a time around the table, often with hilarious outcomes.

New to the Highest Bidder game series (only available in this Valentine's Day edition) is the "Broken Heart". This card is always placed face up in front of a specific player. Certain Kiss Cards played from your hand have you move the Broken Heart around the table, clockwise or counter-clockwise. If you're unfortunate to have the Broken Heart in front of you when you win a bid, you only score half the value of the card you were bidding on. 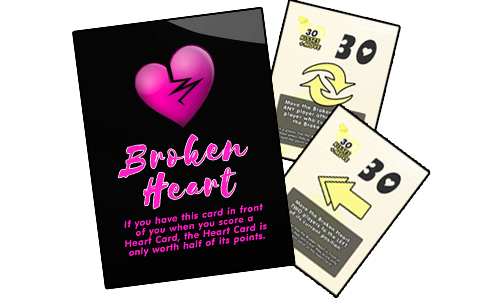 While you won't receive your game before Valentine's Day, buy it on or before February 14 and you PAY ONLY FOR PRINTING & SHIPPING — the creator makes only as small a profit as is allowed by The Game Crafter during this sale ($0.89 per sold game)!