World War III is raging and you must bring your nation to victory in a tactical battle for world domination. Over the course of 4 years (rounds) and 11 major battles (turns) you fight for control over real world nations. Highest Bidder: World at War is:

Each year of the war there are 3 nations presented at the center of the table, worth 1-7 Domination Points. Using Deployment Cards in your hand you must place secret bids to win battles over these territories.

Players sort the cards in their hands simultaneously to form battle plans, then announce "ready to battle". The dealer counts down: "3, 2, 1, Battle". On "battle", all players must play at least 1 card face down in individual Battle Stacks.

Next, cards are revealed one at a time around the table as Ground Units and Special Units are deployed. Numbered Ground Unit cards (10-70) add to the value of your bid while Special Units have text-based abilities that take effect when revealed. Choose your battles wisely, deploy units with strategic consideration, and combine cards in fun and clever ways.

When all cards have been revealed the player with the highest total value of their numbered Ground Units is declared victorious in the battle. The war continues with the remaining battles of the round using the remaining cards in your hand.

Once cards have been played you cannot change your battle plan. Hilarious situations and battle outcomes are guaranteed as cards begin to interact between players in unexpected ways.

Numbered Ground Units that add to your bid value range from Squad (10) to Division (70). The text-based Special Unit cards have unique abilities.

This cheaper and more accessible base version of Highest Bidder: World at War includes 8 unique Special Units. The Ultimate Warfare edition includes a bigger box with more cards (16 unique units) and other optional add-ons for a more strategic game – see further down for more information.

The base units are:

Programmed Actions: Combining Special Units in clever ways — and deploying them at the right time — is key to victory. The game has loads of replay value as you will constantly find yourself in new and unique situations. Lots of laughs are guaranteed as your carefully crafted battle plans work out beautifully or are completely shot to pieces by enemy forces! Even when you lose a battle you will laugh at how it happened.

The Nation Cards you're fighting for control over represent 11 real life countries, including the US, China, India, Germany, the UK, Canada, and more. The point value of each country is based on the size of their real life military.

Should you save your units to go for a more valuable nation, or should you spread out your cards to try to win multiple battles?

During the last year of the war there are only 2 Nation Cards to fight over, worth double points. This keeps the game exciting to the very end as even players who are far behind have a theoretical chance of winning, especially if there's also a "Natural Resources" (Double Points) card in play.

After 4 years and 11 historic battles the player with the most Domination Points is declared the winner of Highest Bidder: World at War.

Big battles with many cards can bring nail-biting excitement and important decisions to make mid-battle. 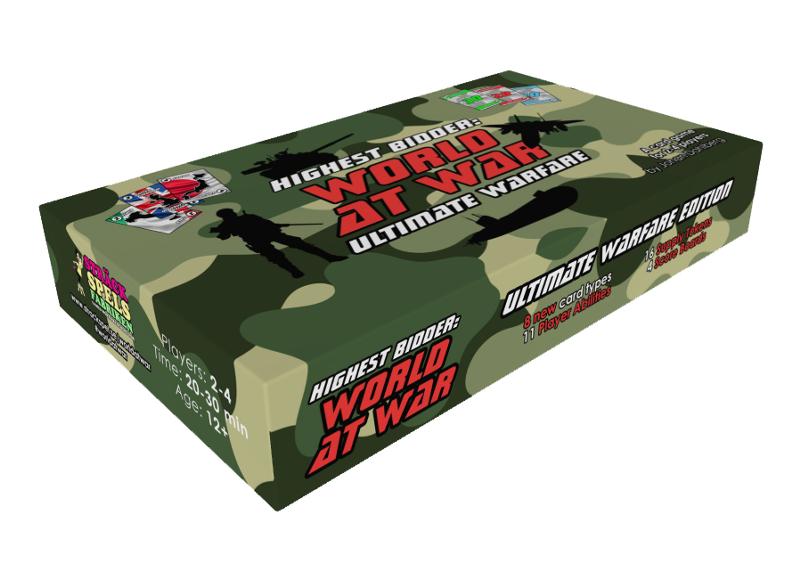 Highest Bidder: World at War is a fun and exciting game as the core game play is varied and offers plenty of strategies and tactical decisions. But for a bigger experience, check out the Ultimate Warfare edition.

The Ultimate Warfare edition includes the base game plus the entirely optional bonus components listed below. When playing the game for the first time it's recommended that the optional additions are removed in order to learn the base game first.

The Ultimate Warfare edition adds the following (optional) components to the base game: