Hoodwink: A Game of Strategy and Bluffs

Hoodwink is a strategy game where two players try to maneuver secret tiles to steal treasure. 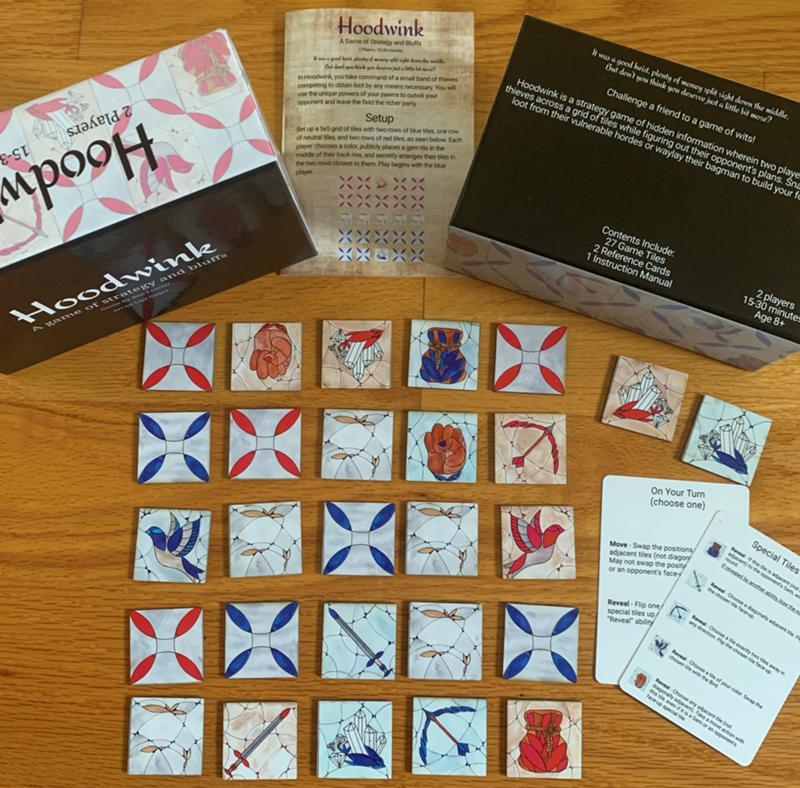 Hoodwink is a light strategy game for two players about sneaking, bluffing, and stealing riches! Each player takes command of a squad of five thieves hidden around the board and must take advantage of their unique abilities to relieve their opponent of their wealth.

In Hoodwink, tiles are split up into three colors, red, blue, and grey. Players hide their five thieves alongside blank tiles face-down to obscure their stratagems from their rival. So long as a tile remains face-down, it can be moved by either player freely. Think you know what your opponent is plotting? Send their tile off course!

As soon as a tile is revealed, it can no longer use its special power, but that does not mean it is useless! You can only give commands to face-up tiles of your color, so utilize your exposed units as obstacles to disrupt your opponent's plans. Mastery of Hoodwink includes both the offensive tools of a hidden tile and the defensive tools of a revealed tile!

Hoodwink is played as a best two out of three rounds. During a round, each player works to sneak their looter, the Bag, toward the opposing gem to capture it for a point, but be careful! If a Bag is ever revealed by an opponent's attack, they will simply take the loot it was carrying, also scoring a point! Try not to get too complacent with your strategies, or you might find yourself poorer than you arrived!

How to Play Video