The Lost Game of the Jungle Skippers. A classic style card game with a new twist.

Based on feedback from the 300+ decks we have sold, we have created a new rule sheet that replaces the Rulebook in previous editions.

Some 80 years ago, the Skippers of jungle boats were some of the bravest, most adventuring men who ever adventured. They were isolated from civilization and when they lost their only deck of cards, they had to improvise.
Taking used trip tickets, stamps, and jungle inks, they transformed tickets into handmade decks of cards. They remembered the rules to some of their favorite games: Hearts, Rummy, Uno, and they mashed them all up to create Jungle Rummy, the Game of the Jungle. With a little Skipper magic, and a few twists, this game was the favorite pastime of the 1930's in the depths of the Amazon, Congo and the River Nile.

**Jungle Rummy is a casual card game for 2-4 people, which takes elements of Hearts, Rummy, and Uno, and transforms them with a Jungle themed twist. The scoring system creates a set of constantly changing objectives, and the interaction between players can be frenzied and passionate.**

Want to learn the basics about Jungle Rummy, and how to play? Here's our explanation of the rules, aided by some archaic technology.


(This is the unboxing video that we made when we received our final prototype. We have a few more produced videos that will be going up soon.)

"The artwork on the cards is stunning, designed to look like old trip tickets" "Once we figured out the rhythm of the game, it became a laugh filled all out battle to win! " 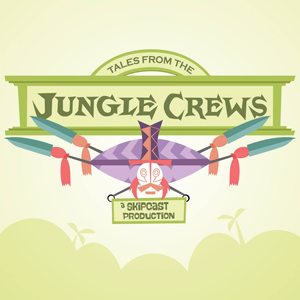