Eat your prey to survive, but your prey eats your predator. This “enemy of my enemy is my friend” effect makes it difficult to tip the ecosystem balance in your favor. Winning demands system thinking.

A population version of Rock-Paper-Scissors, this game of strategy and surprising reversals is based on ecological dynamics. The game is a small ecosystem in which entire herds compete.

Several types of creatures (Rock, Paper, Scissors, and Goo) try to thrive as they compete for space. Each type is both predator and prey to another. Players take turns strategically placing their creatures and invading vulnerable prey. One might think eating more prey always would be a good strategy, but this ecosystem thrives when there is a balance that maintains biodiversity. This is a fragile balance that could TIP to favor one or more species and possibly causing the ecosystem to collapse. Careful strategy is required to tip the balance in one's favor.

What will happen to your herd? Will it thrive? Will it dominate the island? Will it be hunted to extinction? Will the ecosystem be destroyed?

Two games are included. The first takes place on a strange sandy island where rock, paper, scissors battle. In the second game included, the setting is microbial, with colorful microbes representing a microscopic version of Rock-Paper-Scissors.

The microbial version roughly simulates three different strains of e-coli bacteria competing. The rules are the same in the two games, except the microbial game lasts longer so that you can experience dynamics, such as rebounds and reversals of fortune that actually occur in nature. As a mini-model of actual population dynamics, it can serve as an introduction to ecosystem modeling. The game demonstrates ecological phenomena such as the hydra effect, as the rule book describes. Very easy to use computer simulations of the game are included. Learn about ecological balance and system modeling while strategizing within an imaginative game environment.

The rules are simple enough to fit on a small player aid card, yet game play yields surprisingly complex patterns.

Can be played by two, three, and four players. 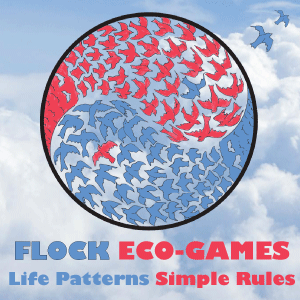