In a "matrix game” there are few preset rules limiting what players can do. Instead, each is free to undertake any plausible action during their turn. The chances of success or failure, as well as the effects of the action, are largely determined through structured argument and discussion. This process allows for imaginative game dynamics that are lively and open-ended, and yet also grounded in reality.

First developed by Chris Engle, matrix games have been played by hobbyists for years. They have also been used as serious games for training at the US Army War College, National Defense University, the Central Intelligence Agency, and elsewhere; for defence planning, capability assessment, and acquisitions in Australia, Canada, the UK, and US; for security planning for the Vancouver Olympics; as a research and analytical support tool at the UK Foreign Office; and as an educational method in various universities. They are particularly well-suited for multi-sided conflicts or other issues that involve a broad range of capabilities and interaction.

MaGCK contains everything that is required to play two different matrix games, or to design your own matrix games addressing almost any aspect of modern conflict:

Player briefings and supplementary rules for ISIS CRISIS, a matrix game that explores the rise and decline of the so-called “Islamic State” insurgency in Iraq. Two scenarios are included: "The Caliphate Reborn?" (set in September 2014) and "Road to Mosul” (starting January 2016).

Player briefings, map tiles, and supplementary rules for A RECKONING OF VULTURES, a game that explores coup plotting and political skullduggery in a fictional dictatorship.

255 large blank game tokens in eight colours, together with over 700 stickers depicting various unit types, other assets, capabilities, and effects. The stickers are used to customize the game tokens, offering enormous flexibility for matrix game designers.

80 smaller discs in the same colours as above, which can be used to indicate damage, supplies and resources, political influence, or other characteristics.

In addition, purchasers of MaGCK gain access to templates so they can print additional stickers using readily-available sticker sheets and any laser printer—thus making it possible to produce an unlimited number of games and scenarios.

The matrix game approach is a powerful tool for eliciting subject matter expert insight on complex questions. The process is fast flowing and highly flexible. 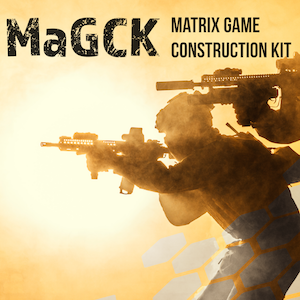