Be a mercenary. Save a nation.

MERC is an all against 1 area control game where each player hires and controls a team of mercenaries. One player takes the role of the evil Dictator, the rest work together to defeat the dictator. 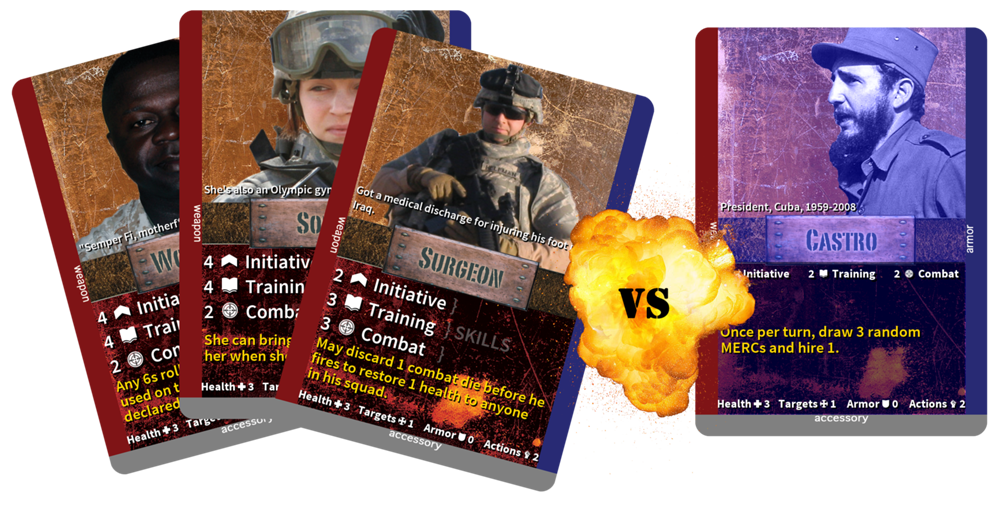 Tenagra is a wealthy country full of industries. Taking control of those industries will finance your efforts. Along the way you'll pick up equipment and hire MERCs. You'll need to train militia to fortify and hold territory after you've taken it.

There are 47 unique MERCs for you to hire, each with their own personalities, special abilities, skills, and weaknesses. The right combination of MERCs will lead you to victory, but you'll have to compete to hire them against the other players who are also drawing from the same talent pool, including the Dictator!

Every game of MERC is unique, because the map deck allows you to reconfigure the island of Tenagra so many ways. Plus, sometimes the best MERCs are killed in the first couple days on the island, so you have to fight your way to victory with their lesser counterparts. All of these variables ensure that you'll have endless amounts of fun playing MERC.

Perhaps best of all, MERC is a complex strategy game you can play in about an hour. It's not like other military-themed games that can take several hours or days to play.

Play happens over 5 rounds. Each Rebel forms a squad of MERCs who will do a combination of exploration, training militia to hold territory, and fight to gain new territory on their turn. All the Rebels work together to ultimately overthrow the Dictator by killing him or taking control of his territories.

You can overthrow the Dictator by controlling more territory than him at the end of 5 days, killing the Dictator, or capturing his secret base. 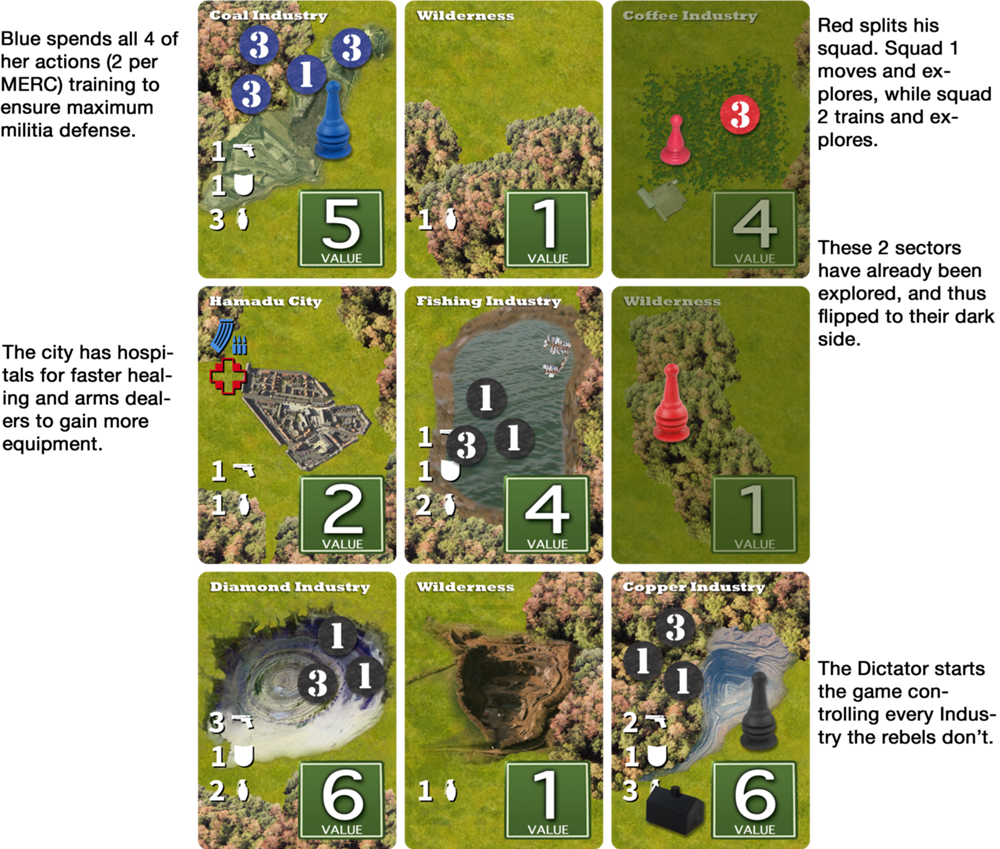 Meanwhile the Dictator will often hire MERCs, and has lots of his own milita. Plus he's got a deck of dirty underhanded tactics like threatening families, poisoning the water, and hitting you from a distance with artilary barrage.

MERC is based upon an old DOS game from the 1990's called Jagged Alliance. It was the first game I was ever truly a fan of, and I've always found it unfortunate that there hasn't been a good successor since Jagged Alliance 2 in the early 2000s.

I started working on MERC in 2007 and started playing it with friends and co-workers in 2008. MERC is actually the reason that The Game Crafter exists. Back then it had over 400 cards, and I was sick of manually printing and cutting them out. When I found no one to do it for me, I convinced my business partners that we should do it, and The Game Crafter was born.

In fact, we are all in the game! 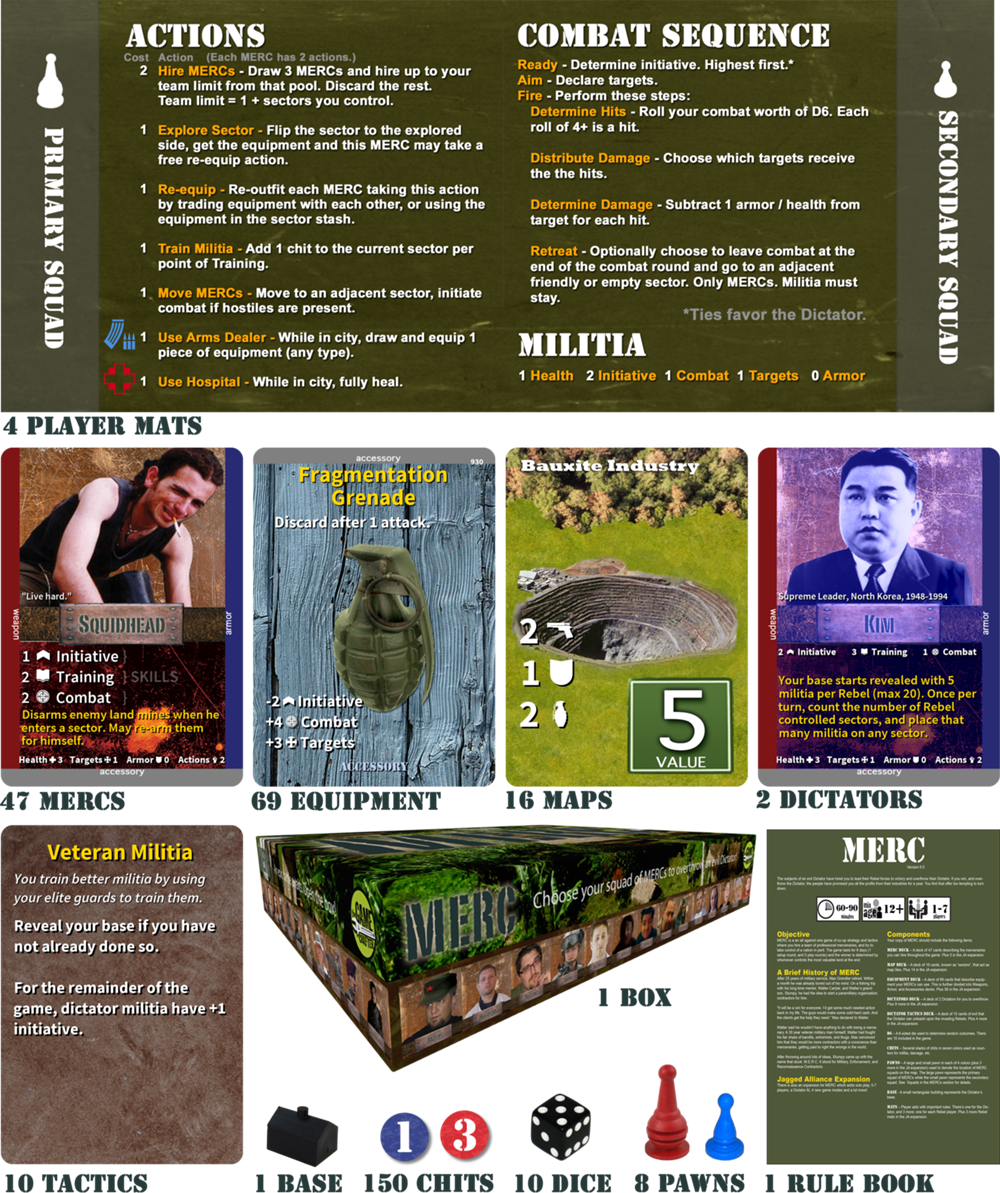