Check out Color Coordinated, our brand new game on Kickstarter! Manufacturing and fulfillment by The Game Crafter! Click the link HERE to help bring this game to life!

Monster Mania is a family friendly battle card game for 1-6 players (solo and co-op mode are variants) where you play the role of a bevy of massive monsters including huge insects, robots, dinosaurs, and more! These monsters are all bent on destroying each other and everything around them, all while using the city as their battleground! Use an expansive environment including oil trucks, cruise liners, and ferris wheels to throw at your opposing monsters; the world is your arsenal! Play counters from your hand to sway the tide of battle in your favor! Activate supports such as military tanks, trees, and power plants to assist your monsters! Topple buildings, evade damage, and launch devastating attacks as you defeat all other monsters standing in your way!

"There are some really really fun combos and strategies that you can build up as the game progresses...every single time you play it you are going to have a new and varied experience..."

Meet Me At The Table Games 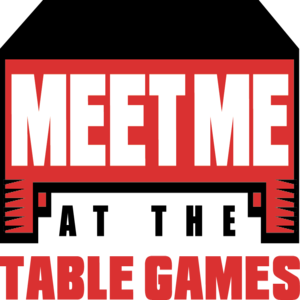