This deck, hosted by the Keeling Lab at UBC, is a special microbial STARTER deck. It includes a variety of organisms that were found in a small riparian system outside the Beaty Biodiversity Museum in Vancouver, British Columbia. As such, it is a good representation of pond microbial biodiversity.

Note the game is currently in beta as the scientific content is continually being vetted by experts. Note that the general game play is based on trophic connections that are all "black" in colour, and represented by the usual FOOD CHAIN numbers of 1 to 3. This game does not work with other PHYLO game systems.

Play the ecosystem game, collect the cards, and contribute to the project!

PHYLO is a project that began as a reaction to the following nugget of information: Kids know more about Pokemon creatures than they do about real creatures.

PHYLO is also: (1) a card game that makes use of the wonderful, complex, and inspiring things that inform the notion of biodiversity; (2) an exercise in crowd sourcing, open access, and open game development; and (3) FREAKIN’ AWESOME!

* This is a revenue neutral product, meaning that no profits are made. Please do consider making a contribution to the Beaty Biodiversity Museum and their fine outreach efforts. 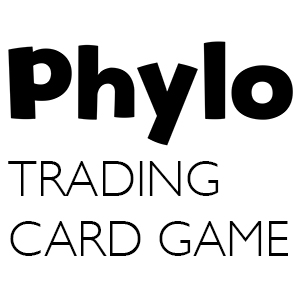