Try before you buy

Watch this playthrough by the Unfiltered Gamer

Planet Fulcrum. A strange and mysterious world at the epicenter of our universe, eternally seeking a worthy champion to wield its untold power. Like countless other would-be conquerors, you have been spirited here by unfathomable means, captive to the planet’s irresistible call.

You awake, lost and confused, to find your new home has endowed you with powerful new abilities. Abilities that increase in potency with each piece of Planet Fulcrum’s territory under your control; Intensifying your power and aiding you on your quest for dominion.

However, your quest will not be an easy one. You are not alone, and others share your desire for power. Conflict is inevitable, but consider your actions with caution; Planet Fulcrum sees all and responds in kind. Those wicked of deed cannot walk with the righteous. But wickedness has its own rewards.

During the game, you’ll move around the board collecting Fulcra, coalesced cubes of the planet’s raw power. Exchange these for planetary territory and tier increases for your Power cards.

The more territory you control, the stronger your bond with Planet Fulcrum and the more powerful you will become. But be prepared to defend your gains from those who would steal it from you.

Specific Power cards represent your abilities. You will increase their tier level and potency by controlling territory within the matching region, then use them to battle your rivals.

Battle your rivals in strategic deck-driven combat. Use secret modifiers to gain the competitive edge and defeat your foes to reduce their power and with it, their territorial control.

On Planet Fulcrum you don’t choose your faction. Your actions do. Each affects your Morality tracker, which in turn determines your faction alignment. Act righteously and be elevated into the ranks of the Guardians; evil deeds will see you slide into the clutches of the Overlords, or achieve balance and be welcomed as a Nomad.

Accrue points by controlling territory, leveling up your Power cards, and collecting items. The game ends when every territory is under player control. The player with the highest points total is the victor.

If you like competitive area control games, Planet Fulcrum is one I strongly suggest you take a look at. 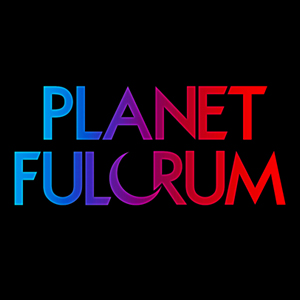