The next classic family dice game has arrived!

For decades, Yahtzee, Farkle, Bunco, and Kismet have ruled the family dice scoring game scene and have taken up the space on store shelves, leaving the players with a limited game selection and even more limited game play style options. Its always been the same five pale white dice, and the same repetitive and predictable game play. It's time for something new to play... Introducing the Royal 9 Dice Poker Game, the dice game hidden gem of the pacific northwest and the next evolution of the family dice scoring game that brings together not only all the exciting elements found in the popular classic dice games, but also the player vs. player excitement and decision making drama found in the world's most popular card game, Poker! Featuring over thirty unique dices faces instead of the standard one through six found in those "other" games, this hybrid dice game with a custom, never before seen dice layout allows players to create hands never before possible in dice scoring games, and the addition of the special sixth "Royal" die allows for even MORE scoring options and press your luck action! Players take turns trying to score target hands on their scorecards for points, and using the "Royal" die, they can possibly double their points scored, make certain special hands possible to score, or even bust their hand and cause them to lose their turn! At the end of the game, the players will all compare their scored hands against each other to try and earn even more points in a heads up showdown! Will your three Queens hold up against the other player's Three Of A Kind? Is that Full House going to come crashing down? Or is that Flush going right down the toilet along with your chances of winning? Only one way to find out! There has never been so many scoring options and choices for a player in a dice scoring game and you will NEVER play the same game twice! Whether playing alone, or with up to five others, Royal 9 Dice Poker Game is an exciting new take on a timeless genre that feels familiar, until your first roll of the dice! Royal 9 Dice Poker Game will become a new staple in your family's game line up and create fun memories for years to come!

"It's family friendly, it's casual, and it does what it sets out to do... Easy to get into, so do I recommend it? YES." 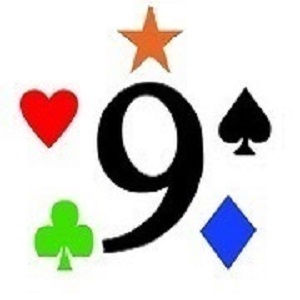