A Head-to-Head Tile Placement Game Inspired by the Puzzle Gaming Genre
Soul Puzzler is a 2-player, head-to-head, tile placement puzzle game inspired by the puzzle based video games of the 90's to now. Similar enough to another classic, popular game, Soul Puzzler is easily accessible to all players. However, it has layers of depth that will please the more experienced gamer.

Thanks to the art style of Rodrigo "Rush" Martinez, Soul Puzzler is endowed with an art style reminiscent of the games within the Video Game Puzzle genre. His craft and imagination has been the foundation of the creation of the world of Aurasal, the realm in which Soul Puzzler exists. A large beautiful world full of wonder, delights, and sweeping vistas where the sunlight shines with a constant, warming presence. However, perhaps due to the quirks of nature or the whims of some unknown power, the world spins in such a way in which the sun only shines on one half of the planet. If the World of Light is something of a beautiful wonder, the dark side is its antithesis. Cold, gloomy, unknown and forgotten—the Midnight Lands are full of the most hostile terrain imaginable. Near the equator of Aurasal light merges into the darkness; here in the forever dusk and eternal dawn, exists Aurasal’s crown jewel, the city of Concordica.

And in this place where the denizens of the light and dark meet, trade, and politic, they also do something more. They fight.

The board game is based on a popular event in Concordica in which souls are waged against one another to prove their might and intellect. Every year there is a tournament in which different countries send representatives to battle for a place amongst the greatest in the realm. This is the Soul Puzzler Tournament.


Gameplay: During each turn a player may take one of two actions:

• Play a Soul Token from their Soul Pool

• Switch a Soul Token’s location with an adjacent Soul Token*

*Any Soul Token that is not located diagonally, is adjacent to the Soul Token next to it.

In order to play a Soul Token, you take a Soul Token from your Soul Pool and place it in the bottom most square of the column of your choice. Once the Soul Token is placed or a Soul Token is switched, the turn then goes to the next player. You may not undo an opponents turn by switching back a soul token that was just switched. Only one Action may be chosen each turn unless an ability tells you otherwise.

If at any time during your turn, or your opponents, there is a row or column of 3 or more adjacent Soul Tokens of the same color, the scoring begins.

If at any time during your turn you no longer have any Soul Tokens in your Soul Pool, you must take the switch action.

The game ends when one player gets to 15 points.

TRY IT OUT ON TABLETOPIA: Soul Puzzler [tabletopia.com] 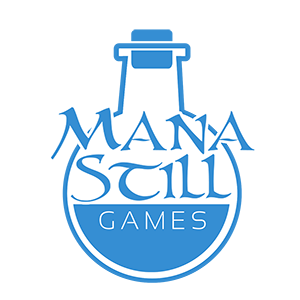