A tile placing game with many ways to play.

Spurs and Sprockets is a perfect information, abstract strategy game for two players. Players each have a matching deck of eight cards/tiles that they take turns placing orthogonally into a 4 X 4 grid, in an attempt to link three or four in a row. There is no board in Spurs and Sprockets so the grid grows organically, based on the placement of cards/tiles.

This third edition of Spurs and Sprockets comes with 24 square cards and rules for four different ways of playing, ranging from a simple Tic-Tac-Toe-like game where players gain 8 points for four in a row and 3 points for each set of three in a row, to a game where every placement of a card may result in an attack and removal of another card.

Spurs and Sprockets was developed to inspire game designers to create variants and additional ways to play with the decks.

The First Edition of Spurs and Sprockets was printed as a post card game and given away by the designer at a Southern California Strategicon Convention in 2012.

The Second Edition was made out of laser cut birch and was extremely limited.

This Third Edition includes exclusive artwork and comes with a third set of 8 cards we are calling the "Edison Deck".

Feel free to come up with new ways to use these decks and post your creations on the game page at BoardGameGeek.com. Or here in the comments.

I really like the way the game is taught, as well as how each variant game keeps adding a new concept and evolves it into something more interesting. 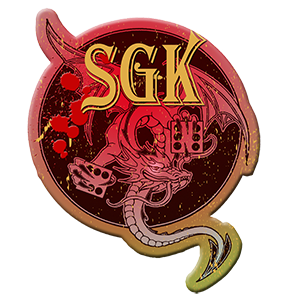