The basic mechanics of the game remain the same but because there are more cards more people can play at a time. Sets should consist of at least four cards of the same rank. Runs are at least three cards of the same suit in order. Deal ten cards for two or three players; seven cards for four, five, or six players; six cards for seven, eight, nine or ten players. The Joker, the Wizard, and the Old Maid are treated as wild cards with no distinction between them.

The card designs, for all but the wild cards, are based on the International Playing Cards deck marketed by Hiram Jones in 1895. I changed the color of his two new suits to blue, and changed the symbol of the Cross suit from a cross cleché to a simple saltire and I simplified the drawings for the face cards. 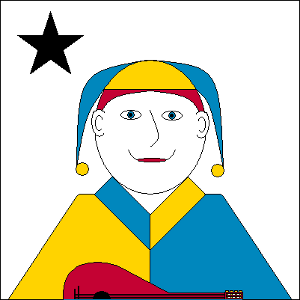