Welcome to the Taco Tribe party where the player who eats the biggest and best tacos will win!

Welcome to the Taco Tribe party where the player who eats the biggest and best tacos will win! The only problem is ingredients have a life of their own and will only hang out next to other ingredients that they like… Plus the tacos themselves like to dress up.

During this step a player may play as many cards from their hand as possible. There are four types of cards, the rules for playing each type follow. Empty taco: An empty taco may be played any time on its own onto your plate. Outfit: One outfit may be played on top of an empty taco. Ingredient: Each ingredient may only be stacked onto an empty taco, or stacked onto an ingredient that matches the cards requirement. New ingredients are tucked behind the card already on the plate. Topper: A topper (such as a Tiny Hat) may only be played on a taco that has three ingredients on it. Once a topper is played no more cards may be added except for an outfit.

For example, Jim plays an outfit plus two ingredients, which would result in a pickup of 3.

After playing cards a player may choose to discard some or all remaining cards in their hand. If a player did not or could not play any cards during the play cards step, they must discard their whole hand, pick up the four cards in the middle, and end their turn.

If a player does not use their entire pickup amount, they must take the highest scoring card remaining in the center and place it sideways next to their tacos. This card is burned and will be worth negative points at the end of the game. If cards are tied for their score the player may choose which card to burn.

If a player has less than 4 cards in their hand after picking up cards, they must draw from the top of the deck until they have 4 cards in hand. Then their turn ends.

2 players: The game ends when one player has completed 3 tacos (with outfit, 3 ingredients minimum, and a topper) OR when the deck runs out.

3-4 players: The game ends when one player has completed 2 tacos (with outfit, 3 ingredients minimum, and a topper) OR when the deck has run out twice. The first time the deck runs out the discard pile should be shuffled into a fresh deck.

At the end of the game each player scores their 3 biggest tacos by adding up the point value of each card played. A player’s biggest taco (most cards stacked) is counted twice.

Each taco without any ingredients is -2 points (because without filling a taco it is just a chip…and it chips away at your score…).

Each burned card is worth negative points equal to its score.

Once all scores have been calculated the player with the biggest score wins the game, if there is a tie the player who last played a card wins.

Hot sauce mode: You can play an empty taco into an opponent’s plate which may result in them getting negative points at the end of the game. 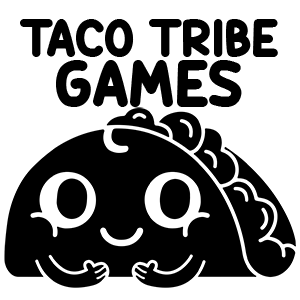