A Game of Horror and Dark Humor

You’ve heard it all before:

- The dead are coming back to life, and they’re hungry!

- Cemeteries are empty and the world is a wasteland.

But now it’s for real! Z-Day is finally here. Put down your cell phones and pick up your guns, it’s time to put that lifetime of survival training from Zombie Movies to use - I hope you were paying attention. If not, you had better remember one thing. When being chased by Zombies you don’t have to be the fastest, you just can’t be the slowest. (You thought I was going to say “shoot’em in the head”, or something like that, didn’t you?)

Welcome to the Zombie Apocalypse!

Zombie Apocalypse is a card game of survival horror and humor for 2 Players that unfolds like your favorite zombie movies. Each player controls groups of Humans and Zombies in an effort to survive the Zombie Apocalypse. Humans are greatly outnumbered, but are able to use Weapons and Refuges for protection. Cards like Zombie Horde and Reinforcements can quickly change momentum, but be especially careful of the Zombie Apocalypse card which always keeps the Humans' chances of survival slim at best. In the end, the player with the most Humans and Zombies left standing (or shambling), as well as in their Kill Pile, is declared the winner.

Finally, all cards use stunning photography! Each card bleeds creepiness and dark humor unlike anything ever seen in a Zombie card game. Simple, light, easy to set up at a moment's notice and play anywhere. A quick diversion during lunch, or something to play between larger and more challenging games on game night.

There is a carded set of the Rules included as part of the deck for portability. A paper version is also available for download.

****NOTE: This updated version now comes with the following changes:

- IMPROVED DECK: The deck has been updated and reworked, adding the best cards and mechanics from the 15 expansions (along with some new ones), into one 64 card deck. Everything you will EVER need will now come in this one, easily portable, deck.

- DESIGN/RULE CHANGES: Slight changes to the card design have been made, as well as to the rules. Many of these are due to observations and feedback from myself and others playing the game over the past year. 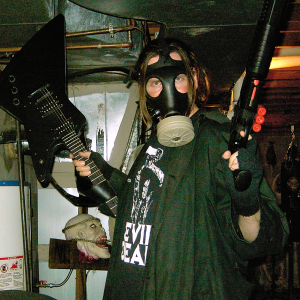