Of Stone and Wood

A quick yet deep strategy game for 2 players.

of written records both towns had been rivals. In times past disputes between the towns of Heartwood (a timber town) & Flint (a mining/quarry town) often led to battles being fought, with both sides using their resources to fund mercenaries to assist them though their dubious loyalty often led them to support whichever side looked like winning. Eventually the leaders of each town realised that these battles not only killed and injured a lot of people, they were incredibly expensive so a new way to settle disputes was needed. "Of Stone and Wood" let a representative of each town settle the dispute in the safety and warmth of the indoors, with both sides wagering a small gemstone that also acted as the mercenary game pieces. The winner kept both gems and got to leave feeling not only wealthier but also smug in their superiority. Over time the lower classes took up the game and it has become a staple in bars and pubs in both towns, with players wagering coins instead of gems.

"Of Stone and Wood" is a quick, light 2-player strategy game that takes 5 minutes to learn and 5-10 minutes to play enabling a "best of 3" competition to be easily played at lunch. Players are moving their pieces, swapping for adjacent opposition or mercenary pieces, or jumping adjacent pieces in order to form a line of 5 of their pieces, but be careful because the swinging loyalty of the mercenaries makes them just as useful to your opponent as they are to you.

Each player starts with 9 of their pieces and 1 mercenary (coin). 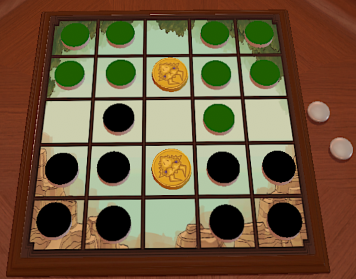 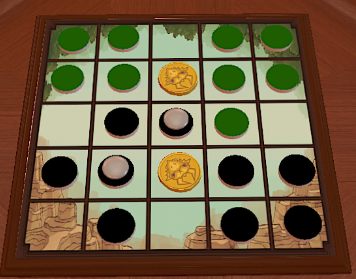 Once a player can form a line of 5 of their pieces, with or without the aid of any mercenary pieces, they win the game. 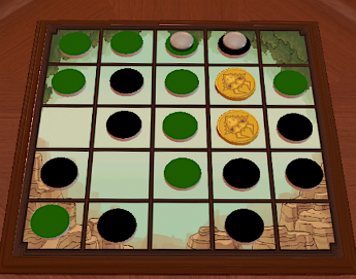 Strategic use of the Move Markers can also inhibit your opponents choices on their next turn.

"Of Stone & Wood" has been extensively played by members of the public at local conventions as well as other designers at an annual protospiel event with many likening it to the strategic yet elegant simplicity of Hnefatafl. 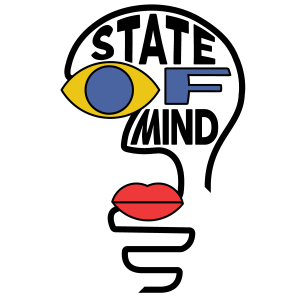